Skip to content
Lifelong love of Breeding, continues to deliver for Carson

Lifelong love of Breeding, continues to deliver for Carson 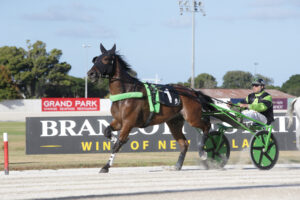 Michele Carson’s fighter pilot father might have been shot down in World War II, but that didn’t stop her mother from giving her the lifetime gift of horses.

“That still hasn’t changed. I’ve still got 12 horses and I love them all to bits. They are too well fed,” the 71-year-old Helensville breeder said.

Mrs Carson said she bred her first horse when she was 19 with her lifetime friend, Tony Milina.

“He’s 84 now and still the most amazing horseman I know. He has a memory for horses like no other, and he still has immense knowledge. He’s always advising me what horses to keep and which ones to get rid of.

Mrs Carson said time was catching up on her and it had been several years since she was last on course.

“I seldom miss the races on TV. Tony keeps me on my toes. I still love the trots, but I’ve got nothing in at the Sales and won’t be attending this year. I remember well the days when my horses used to be in the top four lots,” Carson said.

“But it was always a feast or famine, and to be honest I didn’t even know my horse won last week. My memory is going,” Mrs Carson said.

The Carson-bred Kingsclere (Majestic Son – Strapless   (by Straphanger) won his first race in three starts for owners R J Collins and N G Poingdestre in race two – a maiden trot – at Alexandra Park last Friday evening (January 21). The brown gelding, is the sixth of eight foals out of Strapless.

Strapless was foal number nine out of the Roy McKenzie bred 1984 two-win Arndon mare, Arndon’s Pride. She left 14 foals all-up – the best of them the 2004 Dr Ronerail colt, Paint The Moon, who won five races for Motukarara trainer, Murray Edmonds.

The most successful foals out of Strapless so far have been the 2010 Elsu black colt, Tout Noir, and the 2011 Pegasus Spur bay colt, Grenado – who both won five races.

Kinsclere was the last foal out of the mare bred by Mrs Carson. Strapless’s last foal, a 3-year-old Bacardi Lindy filly named Little Strapper, was bred by R. N. Simpson, and has been leased by J P and Scott Iremonger.

“The horses are just my friends in the paddock now, but I must say I’ve got the most beautiful brown yearling filly on my property. In fact, I would say she’s the best looking and best formed horse I’ve ever bred, and that’s saying something because I’ve bred some nice horse, including Group winners.

“I was going to take her to the Sales, but I thought she was too good for that. I wanted her and didn’t want anyone else having her. I got good advice from Tony too. I can’t speak highly enough about this girl,” Mrs Carson said.

“It comes as no surprise because the mare is also beautiful herself,” she added.

If anyone knows about breeding this woman sure does.

She bred the Group One winning Texican (Bettor’s Delight – Bury My Heart), who has now won more than $1 million in North America.

His biggest victory came at Addington Raceway in November 2011, when Dexter Dunn reined him to win the Group One 3yo Sires Stakes Final in 2011.

Subsequently her two daughters Bury My Heart (In The Pocket) and Follow My Heart have also done wonderful things in the broodmares paddock.

In fact, Mrs Carson said the 13-win 2002 In The Pocket mare Bury My Heart (Mach Three), who produced Texican, was still going strong.

“She hasn’t left anything for a couple of years but she is still looking great. I make sure I really look after her – as I do all my horses,” Mrs Carson said.