Skip to content
Lofty targets for Need You Now

Lofty targets for Need You Now 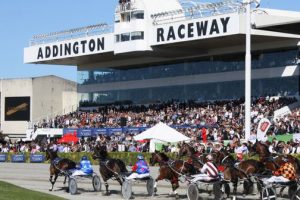 The Robert Dunn-trained mare began well from her wide barrier and was pushed forward by driver Tim Williams to wrestle the early lead off Sweet Mary.
The daughter of Bettor’s Delight ultimately proved too classy for her rivals, controlling the pace throughout and running away to a comfortable 2-3/4 length victory over Sweet Mary, with Enchantee a further three lengths back in third.

“She just keeps on getting better with time,” Dunn said. “She is learning to relax more and she has always had gate speed. With her getting stronger Tim was able to use that speed she has from that wide draw and once she got to the front she settled nicely.

“Once she found the front I think everyone else was running for place money. Once you have got a horse as good as her that finds the front early and is able to dictate from there it makes it very hard for anyone else in the race.

“She looked to be travelling beautifully all the way. You had to be confident a long way from home.”

It was the seventh career win for the four-year-old mare who is now on a path towards the Gr.1 Nevele R Fillies Series Final at Addington Raceway on New Zealand Cup day in November.

“She has got the Nevele R Fillies on Cup Day, that is the main goal. She will then come up north and get ready for the Queen Of Hearts in December.”

Earlier on the card Aimee’s First Meddle kicked-off her career in perfect style when winning on debut in the IRT. Your Horse. Our Passion. Mobile Pace (1980m).

Dunn was delighted with the win, particularly because of the historical connection with the filly.

“It was a good run tonight,” he said. “It was a tough run and she did a bit of work and got attacked quite hard down the back in that wind and stuck on well. I am really pleased with her.

“It’s a great home breed that the Sparks (breeder-owners) have got down in Ashburton. We just retired Hayden’s Meddle who was a good winner for them and a tough old campaigner.

Dunn’s winning streak was not over for the night, with the dual-Island trainer recording a treble when Got You Covered took out the Woodlands Stud Mobile Pace (1980m).

“He deserves that win because he has been racing really honestly,” Dunn said. “He got the perfect run tonight, he led then took a trail and came through. He is a nice, honest horse.”