Skip to content
Mach Quillan proves menacing for his rivals

Of all of the winners across New Zealand last week few were up on the bit and travelling quite as well as Mach Quillan was in his powerful Ascot Park victory. 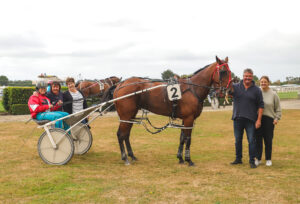 Mach Quillan (Mach Three-Phantom Menace-Holmes Hanover) bolted away from his opposition to score for breeder-trainer Matthew Brinsdon, who races the pacer with his mother Anne.

After drawing 9, 13 and 12 in his previous three outings, the son of the Brinsdon’s smart former racemare Phantom Menace clearly relished the chance to lead from barrier 2 for driver Kerryn Tomlinson.

“He had never drawn a marble before,” Brinsdon said.

“He is getting more level-headed each time he comes back in too.”

“He was pretty fiery when he came back from having three weeks off.”

“But he has been relaxing down each start, it takes an edge off him when he is pulling.”

“He has got high top end speed, but it’s when he starts to relax that he can use it.”

“His mother got on the nickel a little bit, they all have at times.”

Mach Quillan is the fifth winner and the seventh foal from eight race winner Phantom Menace.

Her time in the breeding barn is over after producing strong results and it is now up to her daughters to carry on the breed.

“She is finished up breeding as she is 23 now,” Brinsdon said.

“She has done a great job.”

“I have got an Always B Miki filly out of her that is being broken in now.”

“So that gives us a couple of mares out of her to go on with.”

Major Menace (Art Major) is the other breeding proposition from Phantom Menace.

The mare was retired to stud and has been served by Always B Miki.

The Brinsdons have plenty more mares in their broodmare band, all tracing back to their two-win Son Of Afella mare Kate’s Highlight, Mach Quillan’s grand dam.

Matt Brinsdon is also breeding from a half-sister to Phantom Menace in Kate Rocks (Caprock) who is the dam of former open class pacer Captain Dolmio (Grinfromeartoear).

Captain Dolmio was raced by the Captiain Dolmio Syndicate, made up of a group of Brinsdon’s friends.

Kate Rocks has a two-year-old colt by Always B Miki on the ground, a yearling by Sportswriter which is being broken in and colt foal by Sweet Lou.

Brinsdon is also breeding from another of the descendants of Kate Rocks in Shezza Cracker (Jereme’s Jet).

She showed plenty of promise but didn’t race and she has now left a Vincent filly which is showing promise and an Art Major filly which is now being broken in.