Skip to content
Maternal line finally shining through for the Screens

Maternal line finally shining through for the Screens 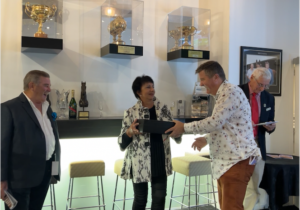 Hamilton couple, John and Terese Screen have owned some nice pacers over the years and now they are hopeful they might have bred a possible Derby contender.

That comment came after Take The Miki (Always B Miki – Unforgiving – Art Major) and Zac Butcher won the Hydroflow Mobile Pace at Alexandra Park on Friday 22nd April by two-and-three-quarter lengths. [He followed-up this win by winning again last Thursday at the same venue in the Alabar Weanling Parade 25 May Mobile Pace.]

“This fella is such a big (17 hands) and fast horse for a 3-year-old, and he is only going to get better and even stronger with time. Steven has mentioned the Derby in passing and it’s certainly not on the radar until Take the Miki proves himself. But the New Zealand Derby will be held in early December just before he turns four, so it may be a possibility.  It would be awesome to have a runner in the Derby,” Screen (John) said.

The Waikato couple are very impressed with the way their laid back 3-year-old goes about his business. They say they are thankful he didn’t inherit his mother’s grumpy and cantankerous genes.

“Even when he came back to the birdcage the other night it was like he’d never been in a race. Steven and Simon have taken their time with him because of his size and it’s now starting to pay dividends.

“We don’t like to start our horses every week but we think he might start again this week simply because he needs the experience and has taken no ill effect from his win last night,” Screen said.

“His mother, Unforgiving, who was bred by Chris and Tina Barlow, raced in Group One and Listed races. She won five of her 23 starts ($79,010) for Steven and Simon

“She’s well named. Very Unforgiving. Unlike her son, Take The Miki, who is the loveliest, natured horse you could imagine.”

Take The Miki has now had three starts. He raced greenly on debut at Cambridge Raceway on April 14, where he finished sixth.

Screen said he and his wife saw Unforgiving as a 2-year-old and bought a quarter share. When she finished racing in October 2015 the Screens bought the remaining shares.

“She had a tough start to life because of her mother. She didn’t take to her at all being her first born. I think she had a few head issues after that, but still won two races for us.

“The Missing Sock also provided us with our first breeding victory when she won at Alexandra Park in 2021 (July 16). She was also trained by Steven and Simon, and driven by Zac before we sold her,” Mrs Screen said.

The Missing Sock has only had one Australian start for a fifth at Swan Hill (Victoria) on February 17.

“We went to Always B Miki simply because he was the fastest pacer in the world and we wanted to cross him with our mare. I also watched a lot of his videos and he impressed me. We always thought we would get a big foal as our mare is not small – and sure enough,” Screen (John) said.

“She is currently not in foal as Rubbadubdub was born on Boxing Day last year December, so we are giving her a year off.

“We are putting her back in foal to McWicked next season. He stands at Belinda and Luke McCarthy’s property in New South Wales.

“All three foals look spectacular. The ‘Works For Me’ has been in work a couple of times and we are hoping she will make a 2-year-old. She has a lot of speed. Next Level also looks stunning while Rubbadubdub is an outstanding animal with a wonderful confirmation.

“You couldn’t get Leonardo Da Vinci to paint a better specimen,” Screen added.

Rubbadubdub is named after the Screens new family car wash business in Hamilton. They were dairy farmers for 30 years and for the last 25 have been property developers and entrepreneurs.

John and Terese have been married for 45 years and have three children, and seven grandchildren. Their son Devon and his wife Libby own 25 per cent of Take The Miki.

The Screens know good horseflesh when they see it.

Reid and McMullan also trained one of the best pacers that the Screens have shared ownership in – the 2013 Art Major gelding, Star Galleria, who has so far won 18 of his 74 starts and $488,579.  He is currently based in Queensland.

As well as Star Galleria the Screens have also shared ownership in the 15-win 2007 Christian Cullen – Van Ished (Holmes Hanover) gelding, Easy On The Eye.

That 2007 Christian Cullen gelding was also trained by Reid and McMullan. The 2012 New Zealand Free-For-All winner also placed 17 times and banked $341,047 in purses.