Skip to content
Missalyssa rewards 25 years of toil for breeder 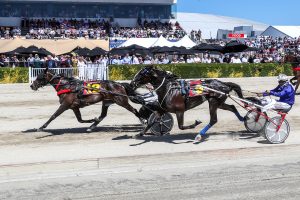 Missalyssa bolts in on Show Day

To fully comprehend just how much Missalyssa’s Show Day win meant to her owner and breeder Warren Pitches, you first have to understand his historical involvement in the industry.

He has had skin in the game for thirty-odd years and raced at least a dozen horses before Missalyssa came along.

But it wasn’t until she cleared maidens on a cold mid-winter night at Forbury Park in June 2018 that he even made it to the winners’ circle.

Fast-forward to 2020 and, while it’s been a hellish year for most, Pitches will remember it for being one of the best of his life.

Since resuming racing in May, Missalyssa has improved out of sight, recording four wins and putting over $31,000 in her connections’ pockets.

This of course was capped off by her New Zealand-record win in the $26,000 Lanson Champagne Mobile Trot at Addington on Show Day.

“We were so thrilled.

“For years we’d wanted to go to the Cup Week meetings so it was wonderful just to have a horse starting there.

“We went up on the Tuesday with no exceptions, just a promise we would enjoy ourselves and we did.

“And she was brilliant on Cup Day too. She led all the way over two miles and only got run down very late.”

Trainer Andrew Faulks had no hesitation backing her up three days later and any doubts Pitches was allayed pre-race.

“In the stables before the race, I went and spoke to Blair Orange and said what do you reckon about her backing up?

“He said the track is fast, they’re going good times, she’ll love it.

It was a brilliant performance and one which saw her shave 0.4 secs off Splash Cola’s mares’ record for the Addington-exclusive 1980-metre distance.

“You wouldn’t believe the thrill we got winning that race.

“And I didn’t know she’d set the record until the Chairman gave his speech after the race.”

The win was the result of at least 25 years’ worth of racing and breeding by Oamaru-based Pitches, who two years ago set up his own horse-centric property to start a breeding programme.

“I’ve had a lot of seconds and thirds, and a few bad luck stories along the way.

“Then two years ago, when Missalyssa was still a maiden, we bought a property that borders the Williamsons in Oamaru.

“I’ve got my mare Uramao based there, though she’s up at Phoebe Stud at present, and Missalyssa will eventually join her and become part of our breeding programme.”

Uramao, which is Oamaru backwards, is Missalyssa’s dam and Pitches came across the Sundon mare when part of a four-man racing syndicate associated with the North Otago Rugby Union more than a decade ago.

“She showed potential and was quite speedy, but mad in the head and one placing was her lot.

“I bought her off the other guys and took her home to breed from.”

He settled on Monarchy and Missalyssa was the result, the name derived from a family link across the Pacific.

“My daughter has lived in ‘the States’ for 22 years, in northern California, where she owns a dude ranch.

“We go over there quite regularly actually, though not this year for obvious reasons.

“Anyway, Alyssa is my granddaughter and around the ranch they call her Miss Alyssa.

“I’ve always said to her that I wanted to fly her over to watch the horse race, and this year would have been perfect for it but with the world as it is, it just couldn’t happen.”

Pitches has been breeding Uramao every two years and after she failed to deliver a foal to Pegasus Spur, he returned to Monarchy’s son, Royal Aspirations, two years ago.

“The result was a three-quarter sister to Missalyssa named after another granddaughter and called Miss Gracie.

“She’s only a yearling but has already been educated and Andy speaks very highly of her.

“With Monarchy no longer available and Royal Aspirations his only son at stud, it made sense to go to him.”

Pitches says the association with Faulks was just by chance,. He’s never regretted staying loyal and is happy both are now getting a pay-off.

“I had a horse that wasn’t going too well and someone suggested sending it out to Noel Creighton on the beach at Waikouaiti.

“It was about then that Andy was taking over and I’ve stuck with him ever since.

“I like him – he’s a good bugger – and I’m thrilled the horse is performing well for him and he’s getting some recognition for his efforts.”

In a not-unfamiliar story for Pitches, things were not looking so rosy for Missalyssa, even after she had a win in the bank.

In May last year, with one win from 20-odd starts and no form to speak of, she a went fairly average race at Rangiora.

“Blair Orange came in and said she needs to go to the paddock for six months.

“She had always showed potential but didn’t have the manners or the enthusiasm.”

When she resumed two days before the nationwide lockdown in March of this year, it had been 10 months since her last race.

Another let-up followed but she hasn’t looked back since.

Naturally, a few offers have come rolling in, but Pitches isn’t interested in selling.

He’s done well in life out of a “rather large” painting and decorating company in the South Island and his history in racing clearly shows he isn’t motivated by profit.

“She’s not for sale.

“I’ll listen to what Andy says and race her until she’s had enough, then she’ll become a broodmare.”