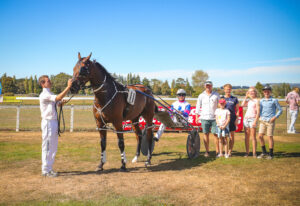 When driver Craig Ferguson had time for an early salute with his impressive first starter Street Art, owner-breeder Bathan Muir knew the race was well in hand.

Muir and wife Jane enjoyed a day out to remember at their home track when Street Art (Art Major-Curragh’s Princess-Mach Three) bolted in by three and a half lengths in his debut at Wyndham on Saturday.

“We didn’t know what to expect, he had only had a workout and a trial and raceday – you don’t know how they’re going to react to it,” Muir said.

“Craig has always liked him all the way through and thought a bit of him.”

“But you don’t want to get too far ahead before they race.”

The Muirs purchased Street Art’s dam Curragh’s Princess from the National Yearling Sales with breeding in mind and judging by the start she has made to her career as a producer they have selected a gem.

Street Art is a full brother to Major Sweetart who has gone one-from-three and was also an impressive winner of her debut on the same track.

“I got the mare off Jack Smolenski at the sales a few years ago now.,” Muir said.

“When we looked at her, she looked like a nice type and a good size, so I bought her as a broodmare.”

“Regan Todd broke her in when he worked for Mark Jones, then she came down here and Snow McLellan got a win out of her.”

“Hamish Hunter took her over at the end and got another two.”

“At the end she went sore, so we put her in the broodmare paddock.”

“She has only had the three foals, we have had trouble getting her in foal but she is in foal now to Always B Miki.”

“We don’t know what the problem was there, she just didn’t hold.”

Major Sweetart hasn’t been seen at the races since October but the impressive maiden winner will be making her way back to the track.

“She is looking really good.”

“She went sore – I don’t think she was quite right in her second and third starts.”

“She is still at home, we are giving her 12 months off but we will try her again.”

The Muirs also have a two-year-old colt from Curragh’s Princess to go on with in the meantime.

“We have got a Rocknroll Heaven colt out of her who is looking really nice.”

For keen observers wondering about Ferguson’s salute early in the run home with Street Art, the reinsman was saluting a friend’s wedding gathering stationed along the home straight.