Skip to content
More winners and more mares for Butt 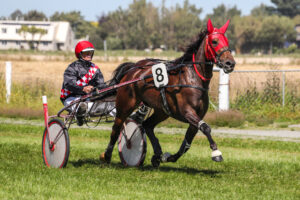 Catherine Butt has a problem faced by many breeders, though given her outstanding run of success it is easy to see why.

Under her Birchbrook Breeding Ltd banner, Butt added another win to her every growing record when Resolve (Andover Hall-Habibti) ran to victory at Methven on Sunday.

Habibti is among a broodmare band that Butt admitted she has struggled to narrow down – a sure sign of its quality.

“We have always bred horses but the last few years we have ended up breeding a few more because you end up getting a few broodmares around you.”

“I have got eight in foal this year, it is pretty hard to sift them out.”

“We have still got one from our original breed from when we bought a filly from the sales when we first got married, which is nice.”

Though Butt and husband David recently announced they were stepping back from training and driving, it will largely be business as usual for the Woodend couple going forward.

They plan to keep on working with their young stock, which will be trained by son Bob or Resolve’s trainer Paul Nairn.

After a few hiccups, the Group One winner is now hitting her straps in the breeding barn.

“We have had a little bit of trouble getting her in foal, but the last couple of years we have been right.

“The first foal was an embryo transfer because she was still racing.”

“But after Resolve was born we have had a few misses.”

“We have got a Father Patrick two-year-old out of her that has just gone for a spell.”

“He went to the workouts and had a run around, but there were no other two-year-olds so he only had a workout with Resolve.”

The mare had a Father Patrick colt in the spring.

Butt has also been enjoying the wave of success Minstrel has enjoyed in Western Australia.

A smart horse for the Butt stable in New Zealand, the pacer has gone on to be a two-time Group One winner for Greg and Skye Bond.

“He has been amazing, we have been so lucky with him.”

“There are a lot of good horses over there, but it is not like here.”

“He was only having a few starts and he was up against Copy That.”

“He would have had to race in the Cup as a four-year-old and it is way too tough.”
“We were lucky because we have known Greg and Skye Bond for years and we’ve had a good association and we have also raced horses with them before.”

“They offered to buy half which was great, it has worked out really well.”

Butt bred Minstrel from Ovaride along with her mother-in-law Jackie and sister-in-law Penny Calder.

Ovaride had a year off after a late foaling but she’s back in foal.

“She is back in foal to Always B Miki and she has got a yearling colt – a full brother to Minstrel – on the ground.”

The Butts will soon work on breaking the full-brother to Minstrel in.