Skip to content
Near perfect weekend for Macca Lodge 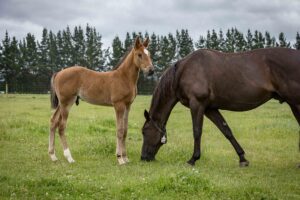 The weekend wasn’t perfect for Southland breeding base Macca Lodge, but it was pretty close.

Studmaster and trainer Brent McIntyre, along with wife Sheree and their staff enjoyed a successful run right across Australasia that started at Gloucester Park on Friday night.

Though Balcatherine couldn’t back up her win in the race last year, she still put in a mighty effort to run third behind fellow New Zealand bred Savvy Bromac (Mach Three-Zante Beach-Fake Left). Born To Boogie took second to complete a New Zealand bred trifecta and round out an excellent result for Macca Lodge.

“The winner is obviously a very nice horse, but it has the draw advantage over our mares from 1,” Brent McIntyre said. “I thought Born To Boogie and Balcatherine both went great races.”

“[Queen] Shenandoah (7th) didn’t get out until it was all over, so we couldn’t have gone much better.”

Macca Lodge also had an impact on the free-for-all at Gloucester Park on Friday night through the win of Wildwest (Raging Bull-Bay Jet-Jereme’s Jet). Macca Lodge stand Wildwest’s sire Raging Bull and own his dam, Bay Jet. Wildwest was bred by Kevin Strong, who has a full brother to the Western Australian star to go on with.

Macca Lodge’s winning run continued into Saturday where McIntyre produced Redneck Woman (He’s Watching-Beaudiene Brilliance-Mach Three) to win at Geraldine. When the rain came down at the Orari track it may have dampened a lot of enthusiasm, but it was great news for the Macca Lodge crew.

“She had jarred up a little bit on the all-weather, so we thought we would send her up to race on the grass. She got a great trip and it was the perfect result really. She is quite a handy mare, we like her.”

Redneck Woman was bred by Macca Lodge and is raced by the Goonette Syndicate, made up of members of Sheree McIntyre’s family from both New Zealand and Australia. The He’s Watching filly is from Beaudiene Brilliance, making her a half-sister to smart southern pacer Paddyproudfoot.

Macca Lodge has a yearling filly by Always B Miki from the mare who has left a colt foal by the same sire. Beaudiene Brilliance has been served by Downbytheseaside recently.