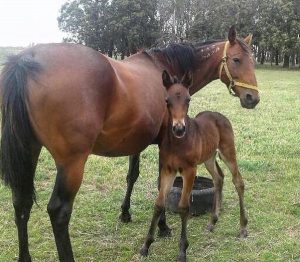 Bagdarin and her Bettor’s Delight filly

Reigning US Horse of the Year Shartin has a new Bettor’s Delight half sister.

Canterbury breeder Grant Crabbe, who bred Shartin in 2013, has a new filly out of the same mare, Bagdarin.

“She was born at home at 8-35 am on Saturday 21st November. Caught me by surprise as she came seven days early.”

She’s Bagdarin’s sixth foal but the first by the super sire Bettor’s Delight.

“She’s a great looking filly,” says Grabbe, “with big ears just like her sister and she was up and drinking within twenty minutes.”

Shartin was sired by Tintin In America, as was her third foal Knockawarwon, while the other sires have been Changeover, A Rocknroll Dance, Sweet Lou and Gold Ace.

Last year Shartin N made history by becoming the first pacing mare to win the US Horse of the Year title as well as the first horse bred outside North America to win the top award. Her season netted 15 wins from 19 races and US$982,177 in stakes as a six-year-old.

2020 hasn’t been as successful, with five wins from 12 starts and she has been overshadowed by the Nancy Takter-trained Dexter Dunn-driven Kissin In The Sand. The five-year-old mare has won eight from 12 including four straight victories over Shartin N.

Shartin’s outstanding achievements in 2019 resulted in Crabbe given an award at this year’s harness racing awards for his special contribution to racing.

Now he has Bagdarin back in foal again to Bettor’s Delight and a young filly to look after.

“I’m undecided as to what to do with her yet but will see how things progress and will probably break her in and go from there.”