Skip to content
Ohaupo couple end year with a bang 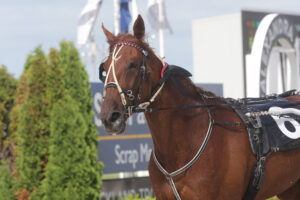 Ask Melanie Barker and Ken McGrath what’s their secret to being the current New Zealand Breeders-of-the-Year, and they will quickly tell you ‘temperament’.

The Waikato couple, who bred and owned Mums Jewel to win her first race at her second attempt at Alexandra Park last Friday (January 31), are also the current New Zealand Endurance Breeders-of-the-Year.

“It was so great to see our filly win. The stable has high hopes for her. We thought she might place, so winning second-up was a bonus.

“It was also an honour to win that national Arab Breeders award, especially after we donated the trophy a couple of years ago. We really enjoy breeding both Standardbreds and Arab horses,” Barker said.

The 64-year-old, who bred her first horse 51 years ago maintained ‘temperament’ was the key to their success.

“If your horse has temperament, then you are half way there. It is critical to us that horses are easy to handle. You must also give them time to develop and mature. We pride ourself on that, and believe that’s why Mums Jewel has such a bright future.

“Her mother (Wheresmemum) had the greatest temperament. Even though she didn’t race she was the loveliest mare to work with. This one (Mums Jewel) has inherited her temperament.

“She’s also a big mare now and her dam appears to produce some speed in her progeny. Tony (Cameron) drove her perfectly. We will be guided by Michelle (Wallis) and Bernie (Hackett) now. They will map out a plan for her in 2022 and we will support that,” Barker said.

Mums Jewel is the seventh of nine foals out of the unraced 2004 Muscles Yankee mare, Wheresmemum.

Foals two and six – Awayonvacation (2008 Dream Vacation gelding) and Molly Bones (2015 Monkey Bones mare) have been the best so far with three wins apiece, but Barker believes there’s a heap more winning to come from the family.

She said Awayonvacation had been retired. A chestnut Peak colt that was born a year before Mums Jewel died.

“Molly Bones is resting after suffering an injury but we hope to get her back racing this year. Mums Star (foal six) also suffered injuries after eight starts, so we bred from her. She just left us a lovely Orlando Vici colt,” Barker said.

“The last foal Wheresmemum left us was a 2019 Orlando Vici filly. We then leased her on to Woodlands Stud who put her to What The Hill.

“Are you allowed to have favourites because the Orlando Vici filly is absolutely beautiful. I’m in awe of her. She’s so well put together, absolutely gorgeous. She also had good size and temperament,” Barker said.

Barker grew up around horses and at one time five of her and McGraths’s children were riding together.

“I was raised on a dry stock farm in the Waikato and horses were always a part of my life. I bred my first horse when I was about 13, and my first standardbred I bred was the 2005 Armbro Invasion – Tess Le Lua gelding, Oto Invasion, who won eight races. I bred her with Ken and his late mother, Maire.”

McGrath added that Tess Le Lua was a very special horse to his mother.

“Mum was very keen on harness racing and tried to get me into it, but I resisted for a very long time. I wished I listened to her a lot earlier than what I did. I don’t know why I left it so long. I absolutely love breeding, owning and racing standardbreds.

“We love breeding, so much so we have had to buy another 40 acres near Cambridge,” added Barker.

The couple have four standardbred broodmares, a number of Arab mares, and one Arabian stallion at their farm, along with a number of young Standardbreds and Arabs.

“Although we are now breeding from Nia’s progeny, we will probably make her available as a free lease if there is any interest.

“If Molly Bones doesn’t make it back to the race-track, she will join the broodmare team next season,” Barker said.

She’s placed once from seven starts, while Mums Jewel has had a first and a third from two Alexandra Park starts. Her third was on December 17.