Skip to content
Owner saw something in Missalyssa’s dam. 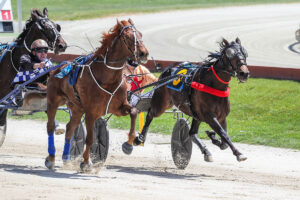 OWERING TO VICTORY ON SHOW DAY AT ADDINGTON (inner)

Owner saw something in Missalyssa’s dam.

Missalyssa (Monarchy-Uramao-Sundon) has found her place to shine at the New Zealand Cup Carnival and with that her breeder-owner Bill Pitches has found his future star trotting broodmare.

In an almost identical result to what she produced in 2020, the mare trained by Andrew Faulks ran second on New Zealand Cup Day over 3200m before winning on Show Day over 1980m. Last year Missalyssa also won on Show Day after running third on New Zealand Cup Day in the same races. Though Pitches had been through it before, the winning feeling wasn’t any less exciting when Missalyssa drove through late to beat Love N The Port.

After more than two decades of trying to find the kind of horse that could shine at the New Zealand Cup Carnival, the owner-breeder was understandably emotional after Missalyssa completed her repeat results this year.

“I’m overwhelmed, it is just brilliant,” Pitches said. “I have been 20 years in the game. We had the mother, Uramao, with the North Otago Rugby Club and she didn’t go too well so I bought the shares out. I saw the potential in her as a broodmare.”

“Missalyssa was just magnificent. We have Miss Gracie (Royal Aspirations-Uramao-Sundon), she is just a yearling but Andy speaks very highly of her. The mare is due to foal any day to Royal Aspirations, she is ready to pop and it would be lovely if she had it today.”

Missalyssa will join her dam in Pitches’ broodmare band, and double its size, but not before her career on the racetrack is over. Judging by Friday’s win it may not be for some time.

Like many of Pitches’ horses before her, Missalyssa wasn’t a star from the moment she hit the track. The owner hadn’t had a lot of luck before the mare came along. He had been involved with many horses over a span of more than two decades before Missalyssa registered his first win at Forbury Park.

“Dexter Dunn drove her at Forbury Park one night and she ran a bit rough, he said put pacifiers on her and I will win next week. She won next week, then she ran a couple of baddies and had a spell. Since then she has been a totally different horse.”

Faulks trained her dam Uramao which began her owner’s association with the trainer. It’s one that will be hard to be broken.

“I had a horse ten years ago and someone said take it to the beach to Noel Creighton – it might have been 15 years ago. Andy was just a lad, then Noel retired and Andy took over. He is just a good bugger and I like him. He has done a fantastic job with this mare.”

“She is the family pet, the children love her. Some people have said why don’t you have her in a bigger stable, I’ve said no way, I would never take her away from Andy. He’s a great trainer and he doesn’t get the recognition he deserves.”

Uramao is Oamaru spelt backwards, a nod to Pitches’ hometown.

The breeder-owner not only got Friday’s winning stake but also bragging rights over his neighbours the Williamson family, who produced Love N The Port for a game second behind his mare following her win on New Zealand Cup Day.