Skip to content
Paynter achieves a breeding milestone at Cambridge 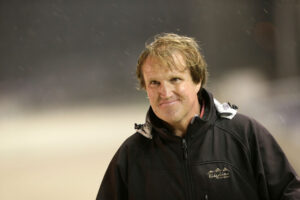 The Cambridge horseman bred his first quinella when Tourminator and Ngauruhoe ran first and second in race one – the Check Out The CR Hire Equipment Maiden Trot. Andre Poutama drove the winner while Paynter sat behind Ngauruhoe.

“That’s the first time I’ve bred a quinella, and it’s also the first time I’ve nailed a trifecta as well. I’ve had a few firsts, seconds, and fourths, but this is very satisfying,” said Paynter, who has been breeding and training standardbreds for more than 20 years, and driving for even longer.

He said he took a great deal of pride when it came to having his mares served by stallions. It was serious business – no joke!

“That was a real buzz running one and two. It’s very satisfying seeing your mare put to a sire and then helping the resulting foal get to the races and then hopefully win.

“All the hard work behind the scenes and trials have paid off. Tourminator is a professional. She is still learning the ropes but she normally does things right.

“I’d like to have a crack at the Northern Oaks with her because I feel she’s the type of filly that will keep on improving. She’s just going to get better with racing and time,” said Paynter, who also co-owns Tourminator and Ngauruhoe.

They were both having their first starts.

“We gave Carol a racing lease on Tourminator, because she and her husband (the late Wayne) were so kind allowing us to breed out of their (two-win) Spike Darling mare, Broomfield Ann, back in 1996.

“I was working for Mike Berger and Wayne and Carol had a weanling with him named Pretty Special (by Sergio Hanover – five wins). I recognised the breed and was told she was the second foal out of Broomfield Ann.

“I’m just so pleased the horse won first up because Carol is a lovely lady and I will never forget that good deed. We now have three generations from Broomfield Ann,” Paynter said.

The Paynter trained and owned Cipollini, who won the 2001 Northern Breeding Stakes with Tony Herlihy (MNZM) in the bike, left nine foals between 2003 and 2016.

Sagan was the eighth and second last foal left by Cipollini.

Paynter said Sagan never made it as a racehorse, due to injury, however he said she was a nice type. The 8-year-old broodmare will have plenty of time to shine at stud.

“She has left four foals so far and was served by Creatine last October. We wanted to go to the French Stallion Bod Eagle, but we couldn’t get in this season so hopefully we can have Sagan served by him next season.

“Her second foal, a 2019 Father Patrick filly named Taken, was sold to John Robinson for $32,000 at the 2021 Yearling Sales in Karaka. We’ve also got a lovely Father Patrick yearling colt out of the mare named Pantani – and he is progressing very well,” Paynter said.

Iditarod raced 10 times for no placings and has left four foals including her first foal, the 2014 Lucky Chucky mare, Aoraki, who has won three races.

“Ngauruhoe is her third foal. She has a lovely un-named Father Patrick yearling colt, and was served in December by Elite Stride,” Paynter said.

“It’s an exciting time to be breeding. We have some amazing families here, including the Pride Of Petite, Great Getaway, Buster Hanover and Chiola Lass families,” he added.