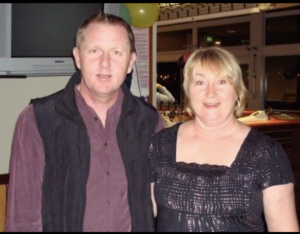 She was driven by Peter Ferguson and trained by the Pukekohe father and son team of Peter and Vaughan Blanchard, not far from her former trainers, Dave and Clare McGowan.

“We didn’t know whether to celebrate or cry. She’s been Group placed in two races and three other races since she was moved on three months ago.

“Carol and I loved that horse, especially after losing our other mare, Gwen’s Invasion and her Majestic Son foal in in October 2010.

“She was family to us, but in the end, we wanted what was best for her, and after lots of discussion we sold her in early December after she won one race for us (August) with Tony Herlihy (MNZM) in the sulky.

“Even though it was tough, we wanted to do the best by Ruby and what’s best for the breed. It’s a breed I’ve always believed in and one that boasts some present and past stars dating back decades. I still have the same line through cousins,” Portland said.

“We still have Ruby’s 3-year-old brother, Taylad Touse (by Used To Me) with Dave and Clare, and there could still be there is still an option to breed from the dam again one day even though she hasn’t left anything since Taylad Touse. She’s currently a hack,” he added.

“The current ‘Horse-of-the-Year’, Sundees Son, is also from the same line. His great, great grand-dam is also Gay Marlene,” the 59-year-old said.

“John Dickie also had some nice ones from the same family ‘Dee’ line.”

He said Taylamade Dee was a replacement mare, three months after they lost Gwen’s Invasion.

“Keeping the family line was awesome.

Portland said Taylamade Dee had left six foals for the Dickies before Portland approached Dickie to see if he could lease the mare because of the family connection.

“We bred just the two from her – Ruby Ridge and Taylad Touse, but we still have the breed on the other side via Gwen’s Invasion.

Portland, who was educated at Penrose High School, worked as an entrepreneur for Griffins in Auckland for 20 years before transferring to Bluebird just on a decade ago.

“I’ve always loved horses since those Uncle Barry and Aunty Sheila days back in the 1980s. That’s when they raced and bred from the same line.

“That mare left two foals, the first of which were bred by Portland Senior and Jury – Earl Of Shebar (2007 Sundon colt) and the Portland and Baker bred Jewel Of Shebar (2013 Monarchy mare),” Portland said.

He was excited about the breed living on through Jewel Of Shebar.

“Carol and I have put her to Quaker Jet and we now have a lovely 2-year-old filly named Jewel Ellery, and we also have a yearling colt by Volstead.

“The mare was served by What The Hill in November so we are looking forward to that foal as well,” Portland said.

“I always thought the strong trotting genes would prevail through and they have. You only have to look at Sundees Son,” he stressed.

And even though he admits he’s strictly a trotting man, Portland and Baker did co-own the 2016 American Ideal – Bliss (By McArdle) colt, Euphoria with trainer McGowan and G. E. Bayley.

The owners sold Euphoria in July 2020.

He has so far placed twice here before going on to win 10 races and just under $91,000 (Group placed) in Perth for Gary Hall Senior.

“To have two of our first three trotters and a pacer be Group placed is really cool,” Portland summarised.