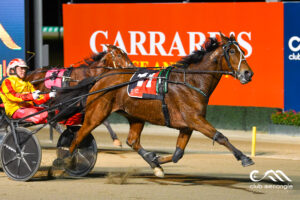 McKenzie, who had enjoyed a successful association with thoroughbreds, advised his great mate that he was keen to get involved with harness racing.

“I told Tony that I wanted to buy a pacing horse or gelding, a two or three-year-old, McKenzie said. “Instead he recommended that I purchase a trotting mare named Queen Kenny owned by Phil Williamson. He told me that it’s not often you get a chance to tap into their breed.”

“We bought her after she finished second at Wyndham one day and she won on the grass at Waikouaiti for us a week later. She went on to win nine races,” McKenzie said.

Numbered among her successes was the 2016 Green Lane Cup at Alexandra Park, while she finished third to Monbet in the Rowe Cup in the same year.

The Monarchy mare’s first foal is none other than Australia’s new trotting sensation Queen Elida (Love You).

Queen Elida began her career as a two-year-old with part-owner-trainer Barron before being entrusted to prominent Victorian-based ex-Kiwi horseman Brent Lilley at the outset of her three-year-old campaign.

Returning as a four-year-old, Queen Elida finished runner-up in Free-for-all company at Melton and then came from near last to beat most of the best trotting mares in the country in the Group 1 $50,000 La Coocaracha in a career-best 1:55.8 at Menangle.

“She’s getting bigger and stronger. I think it’s the Love You coming out in her,” McKenzie said. 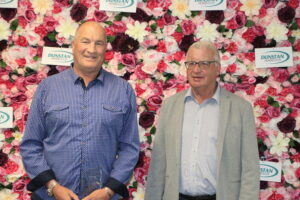 “It’s their first horse and she’s a Group 1 winner,” he said.

The second foal, Toro Stride, a brother to Queen Elida, was bought by Emilio Rosati for an Australasian record price of $280,000 at the National Yearling Sale in Christchurch in 2020. Unplaced at four attempts in NZ, the gelding is now with Victorian trotting maestro Chris Lang.

The next foal, the two-year-old Queen Bea (by Love You), is showing a lot of promise in her early preparation with Barron, while a filly by What The Hill has just been weaned.

Queen Kenny ranks as a sister to the good Menangle winner Princess Kenny (1:55.3) and a half-sister to the Melton winner Here Comes Kyvalley, Royal Kenny and to Majestic Kenny, dam of the 1:58.8 Menangle victor Jake The Mus.

She is a close relative of the millionaire One Over Kenny, One Over Da Moon (2YO Trotter of the Year), the Breeders Crown and Redwood winner Ultimate Stride, One Kenny, Kenny’s Dream and One Majic Kenny, all trotters of some worth.