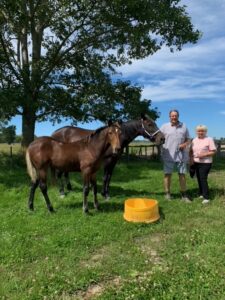 The bonny Soky’s Atom mare Valiant Heart had a red letter day on February 19 when she left winners in both hemispheres.

It was the gelding’s fourth success from five starts on Australian soil and his mile rate of 1:55.1 for 1780 metres was put up when he had nothing in his favour, starting from the back row and sitting parked throughout. He is a very smart customer.

On the same night, Bettor’s Heart, an eight-year-old daughter of Bettor’s Delight and Valiant Heart, finished powerfully from midfield to win a $US18,000 Fillies and Mares’ feature at The Meadowlands in 1:50.8, just 0.4 outside her lifetime mark.

A third winner out of Valiant Heart recently was the six-year-old The General (by Christian Cullen), who emerged successful at Albion Park on January 14. He finished second at the Brisbane headquarters’ track on the same night as Five Star General and Bettor’s Heart won.

The trio were all bred and owned by prominent Ohoka horseman Peter Bagrie and his wife, Anne.

Peter also bred and originally raced and trained Valiant Heart, with whom he partnered to four wins.

“I sold her to Sydney interests as a five-year-old with the agreement that I was to get her back as a broodmare,” Bagrie said. “But the Sydney owners sold her to America.”

Valiant Heart won 10 races in Victoria including five at Moonee Valley and won her way back to the verge of cup class.

Valiant Heart was retired from the racetrack in 2005.

“I got a call from her American trainer Mark Harder to say that she had been nominated for a sale at Harrisburg and that I could buy her before the sale,” Bagrie said.

“I exercised that option and brought her back to New Zealand.”

Since producing The General in 2015, Valiant Heart has left a beautiful three-year-old filly by Rock N Roll Heaven who is unraced owing to a throat problem but is now back in training, a two-year-old filly by Art Major currently in work and a Bettor’s Delight colt foal.

“We have retired her from the breeding barn. She’s 27 and has done a good job,” Bagrie said.  “She’ll spend the rest of her days at our property.”