Skip to content
Rowe in high spirits after 100th win

“It was awesome,” Rowe said. “Every race is huge, I just love the sport.”

Rowe has been a long-time supporter of Cambridge trainer Mike Berger, with all his wins coming in the veteran horseman’s silks. 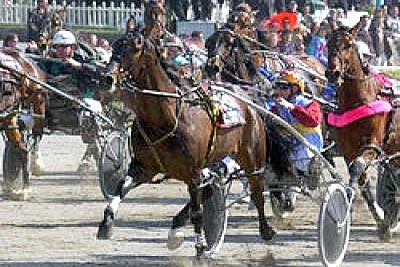 Their association spans nearly 40 years and was instigated by Rowe’s friendship with Berger’s brother, Laurie.

“Mike’s brother Laurie and I are good mates and he decided we would buy a share in a horse, so Mike bought Saieda Girl at the yearling sales back in 1984.

“Laurie Berger was the owner of the Pukemanu Tavern in Martinborough, and the guy from the Martinborough Hotel was in it too.”

Mike Berger was charged with finding the group a racing prospect and was given a small budget to work with at the yearling sales.

“Saieda Girl was the first one we bought back in the day when they had the sales at Claudelands,” Berger said.

“Glen was good friends with my brother and they rang up one day and said could I get them a horse. I asked them how much they wanted to spend, and they said three grand. That made it harder. We bought Saieda Girl for spot-on $3,000.

“I quite liked the breeding. It was a good, tough-old family. I didn’t bother looking at her because I thought she would be out of my price range.

“I was sitting out the back eating a pot of chips when she came into the ring and she wasn’t getting a bid, so I walked in, put my hand up twice and got her.

“I thought that was weird, so I went around and looked at her and thought ‘what have I done’. She was a narrow, spindly-legged thing. You wouldn’t have bought her on looks. I was lucky I didn’t look at her beforehand.

“But she was a good, tough mare and ended up leaving Facta Non Verba, and a few others.”

Facta Non Verba (pictured) gave Rowe some of his greatest moments in racing and more than a quarter of his wins.

“I couldn’t be there, but winning the Easter Cup, and winning the Winter Cup in Brisbane, that was a standout,” Rowe said.

“We won an Inter Dominion heat, but we had to scratch in the morning of the Final, so we were disappointed in that. But we had a second in the New Zealand Cup after doing the hard grind for the whole race and he just got nutted on the line.”

While Saieda Girl won seven races for Rowe, she left a strong lineage that he has enjoyed racing over the years.

“Saieda Girl won seven and she left Pukemanu Express (7), Facta Non Verba (27), and Saieda Bint (7) who was the dam of Geoffrey Clement (5), who was named after Mike’s father, Badbadleroybrown (4), and Bintowar (4),” Rowe said.

While he part-owns Spirit Of Anzac, who has won seven races to date, he also shared in the ownership of his full-brother Bettor Spirits, who won 14 races before being sold to America.

Rowe is still coming down from the high of last week’s win, but he has the opportunity to add to his tally as an owner when Pull The Other Leg contests the Cambridge Homes Mobile Pace (2200m) at Cambridge Raceway on Thursday.

The three-win gelding missed out by the barest of margins when finishing runner-up at the Waikato track last start.

“I watched Pull The Other Leg when he came second, he just missed out by a nose,” Rowe said. “Hopefully he can get up on Thursday.”