The family of the late Father Dan Cummings agreed there could not have been a more fitting tribute to the doyen of Southern Standardbred Breeding than when the yearling named after him sold for $240,000 in Christchurch on Tuesday. 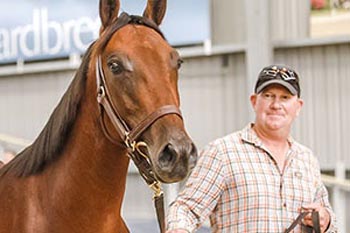 The incredible legacy Cummings left in the New Zealand harness racing industry was on full show when bidders duelled to land Tuapeka Dan, the most sought after yearling on day one of the pacing section of NZ Standardbred’s Christchurch sale.

Some may argue the colt’s stunning physique and blueblood pedigree meant his fate as Tuesday’s sale-topper was sealed before selling began.

Others may suggest when Tuapeka Dan was offered on what would have been Cummings’ 76th birthday his late co-breeder helped the colt’s sale along with a little divine intervention.

What is certain is that the timing of the colt’s sale added to what was an emotional journey back to the National Yearling sales for Cummings’ brother Peter and sister, Julie Davie.

“It is very, very special to do this for him,” Davie said.

Before his death in March of last year, Cummings knew he and his brother and sister had quality horses on their hands in the three yearlings their Tuapeka Lodge offered at Tuesday’s sale.

And when Tuapeka Dan topped yesterday’s selling it proved his highly respected judgment was spot on once again.

“He saw these horses as our babies, he knew they were special, so it is so good that they are,” Davie said.

Davie had faith that Tuapeka Dan would be able to carry the massive responsibility of doing her late brother’s name justice.

She kept the idea of naming the colt after him as a way of honouring the man his family knew as ‘Danny’ to herself until his battle with cancer was over.

“We did think he was a special horse and Danny did himself,” Davie said.

“I nursed him in his last three weeks of his life and I didn’t tell him I was going to call this colt Tuapeka Dan.”

“But it felt right.”

Tuapeka Dan’s time in the sales ring was lengthy and filled with all of the drama a top-priced colt deserved.

Leviathan owner Emilio Rosati simply would not be denied the chance of securing Tuapeka Dan and he succeeded when the colt was knocked down to agent Peter Lagan for $240,000.

The stunning result was a fitting tribute to the late Father Dan Cummings.

And one Davie is certain he would be proud of.

“I was pretty shocked really, it had taken a long time to get it all together to get here.”

“We are very proud and Danny would be very pleased.”

“He will be raising his eyebrows and saying ‘that’s good’ or he would say ‘what do you think about that’.”

Tuapeka Dan was one of two yearlings to sell for more than $200,000 and both went to Australian buyers.

The career of freshman stallion Vincent got an incredible boost when his colt from Suzys Delight sold for a $215,000 .

Yesterday’s sale produced a steady average $44,360, which compared strongly with the $43,487 average of the entire 2020 pacing section in Christchurch.

Quality lots were clearly sought after, but struggles at the lower end of the market contributed to a low clearance rate of 62%.