Skip to content
Satire Franco Clicks with All Sires

Satire Franco Clicks with All Sires

For a mare Brent and Raewyn Shirley didn’t have big plans with, Satire Franco sure is doing an outstanding job at stud.

Satire Franco notched her ninth individual winner when Glorafilia (American Ideal-Satire Franco-Falcon Seelster) charged away from her rivals to score at Winton on Thursday for trainer-driver Nathan Williamson.

The three-year-old was educated by Brent Shirley and sold to Western Australians Jim and Wilma Giumelli as they were campaigning Ragazzo Mach from Williamson’s stable.

Ragazzo Mach is one of many good Southland three-year-olds to have headed to Western Australia at the peak of their powers. 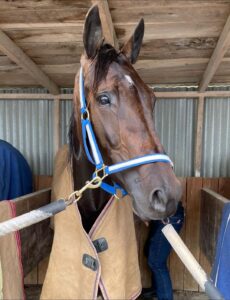 “Rowchester would be the best of them, I think,” Shirley said.

“He was very smart, he won three here before we sold him to Gary Hall.”
“They never saw the best of him because he got laminitis when he arrived over there.”
Racing somewhat intermittently, Rowchester went on to take his career win tally to 11 and his earnings past $100,000 before his retirement.

If Rowchester was number one then Costa Del Magnifico (Mach Three) must rate a very close second among Satire Franco’s foals.

The pacer was a 12-time winner from Shirley’s barn, producing a Group Three Invercargill Cup win as well as running fourth in Locharburn’s Group One Easter Cup.

Satire Franco producing good horses like Rowchester and Costa Del Magnifico wasn’t exactly on Shirley’s mind after he and his wife purchased the mare in the early 2000s.

“We were on our way to Australia for a holiday and she was in the mixed age sale at Christchurch.”
“Vin Nally was going and I said if you can get her for less than $10,000 grab her for me.”
“She was in foal to Live Or Die and after she foaled I wasn’t actually that keen on breeding from her.”

The Live Or Die foal was five-race winner When The Music’s Over.

A steady trail of winners followed, with Satire Franco seeming to click with almost any sire she was served with.

Shirley admitted he would have liked to have kept Glorafilia to have a well-bred daughter to go on with, but it was a better business decision to sell her.

He and his wife have bred from their good performer I Smart, who won six races before retiring.

I Smart has already left a 1.52.2 miler in Euro Beat (Rocknroll Heaven), as well as a promising American Ideal three-year-old called Smart I Am, who Shirley has put huge wraps on.

The Shirleys have also bred from Dunrobin in an arrangement with Macca Lodge.

Satire Franco has left colts, a two-year-old colt by Rocknroll Heaven and yearling colt by Fear The Dragon, for the Shirleys to go on with.

The mare has failed to get in foal in the last two springs but is still in grand order at the age of 22.