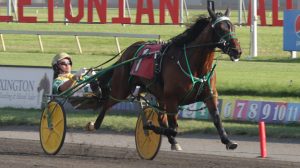 Christchurch mechanic Grant Crabbe is riding the crest of a wave that has no end in sight.

While he’ used to working under the bonnet of a car, it’s the motor of one of his horses that has seen him make headlines.

Shartin, the mare he bred, raised, educated and qualified at Motukarara Raceway during Cup Week in 2016 is now the fastest female Standardbred in the history of the sport.

Shartin broke the world record for females over the mile (1609m), when she paced the distance in a time of 1:46.8 to win the Lady Liberty Final on Hambletonian Day at the Meadowlands Racetrack in New Jersey last weekend.

Her breeder and former owner trainer was at a loss for words at what she has achieved.

“It feels like I’ve won lotto and if I’m being honest it’s better than owning the horse,” said Crabbe.

“I don’t have to pay any of the bills and carry none of the stress that goes with racing a superstar mare like that,” he laughed.

“The horses are a hobby to me and I get such a thrill out of seeing them do well for other people,” he said.

Shartin’s mile was the equal fourth fastest time paced in the history of Harness Racing.

“If there’s a freak out there, she’s it,” said her World Champion reinsman Tim Tetrick after the record win.

“I don’t know how fast she can go…she wasn’t done there, I never untucked my whip. Right now, she’s just so much fun to drive, she’s getting smarter and she’s just on her game,” he said.

While the world record time may have come as a shock to Crabbe and the harness racing community, her victory on the day was no surprise with the mare having been in rampant form since reaching North America.

Shartin has won 12 of her 13 starts in North America this season and is the leading money winner ($742,927) as well as being in pole position to capture the 2019 Horse of the Year title.

Shartin came close to winning that honour in the 2018 season when she was marginally beaten in voting after becoming the first female to win a million dollars in stakes in a single season.

She was beaten by the North American star McWicked who subsequently beat the champion New Zealand export Lazarus twice when racing in the Open Class male ranks last season.

Shartin would become the first New Zealand bred horse to ever win a Horse of the Year title in North America should she win the vote later in the year.

The unfashionably bred Shartin is sired by Tintin In America, a former New Zealand horse of the year who showed immense ability and freakish speed before being retired to stud duties.

He hails from one of the stronger New Zealand maternal families, however as with a lot of New Zealand Standardbred stallions, found it tough to compete for patronage against the best bloodlines from North America and is now based at Yirribee Stud in Victoria.

Crabbe was offered Shartin’s mother Bagdarin as a two-year-old in 2009 when he was working for Nevele R Stud in Prebbleton.

“A trainer down south couldn’t get her to go but I decided to persevere with her. She won her qualifying trial at Chertsey first-up going almost six seconds under qualifying time.

“She won her first race and showed considerable speed until losing form with the vet showing us the problem being arthritis in her knee. I was devastated because she could pace come nice sectionals,” said Crabbe.

Shartin was the second foal from Bagdarin after the first foal proved to be “a bit of a headcase”.

“She was a speed freak and she clearly inherited all of that. She never had an attitude issue, was a beautiful horse to break in and she had perfect manners.

Crabbe initially sold Shartin to Australian interests off the back of a qualifying trial where she showed her immense ability, ripping home in under 27 seconds for her last 400m on the day.

She never raced in New Zealand but delivered on her immense potential winning the Queensland and Tasmanian Oaks before being sold once more to her current North American owners.

“We didn’t get half of what she was worth at the time because of who her sire is, but I’m not in a position where I can afford to keep them all. If we can have a bit of fun with them and make some money along the way then that will be great,” said Crabbe.

“I’ve been lucky that I have worked from home most of my life as a mechanic so it’s been a case of the horses starting off being an hour a day when I was flat out with three kids and paying mortgages.

“I’m 65 now and it’s got to the stage where I just love doing the horses but you can’t pay the bills with love so I spend about two hours a day working the two horses I have at home,” said Crabbe.

One of the two horses in Crabbe’s care is a three-year-old full brother in blood to Shartin.

“He’s a big horse who has needed some time but is showing plenty of the family ability and will work towards a qualifier in October. He makes it exciting to get out bed every morning,” said Crabbe.

“New Zealand is a wonderful nursery for the breeding of horses. The magic and thrill of breeding is that champions can come from anywhere, and be bred by anyone. The publicity in North America following this astounding performance shines a very positive light on our ability to breed quality horses capable of competing with the best bloodlines in the world,” said Mooney.

New Zealand bred pacers are going through a purple patch with the exploits of Shartin and several other exports creating significant demand for New Zealand stock highlighted by the fact 10 of the top 40 money winners in North America were New Zealand bred, a feat never achieved prior to this season.