Julie DeFilippi is a prominent name in the Standardbred industry when it comes to the breed both on and off the track. 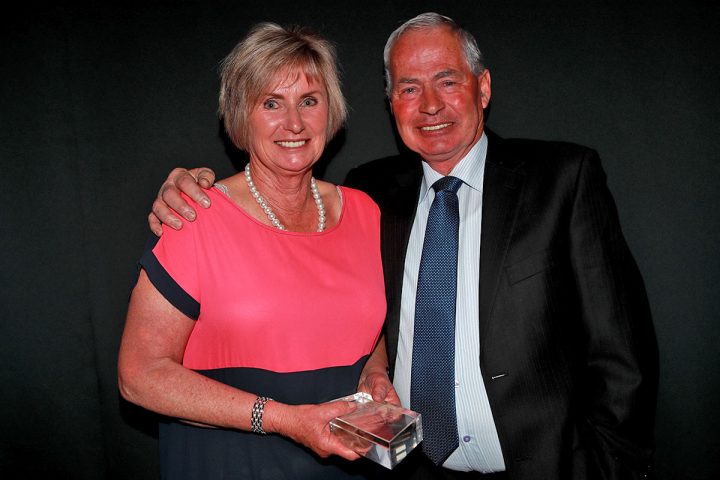 Julie and husband Colin are well respected for the work they do with their racehorses but it’s the work that Julie does behind the scenes for Standardbreds and their life after racing that many people don’t realise.

Julie is the New Zealand Standardbred Association Ambassador for Standardbred Showing which involves a lot of her time and commitment. She attends RAS (Royal Agricultural Society) meetings and conferences and has to contact all RAS shows who run a Standardbred section to ensure they are running a correct set of classes if they wish to be a HOY (Horse of the Year) qualifier. Julie also handles requests for performance cards to keep track of each individual horses results which she then has to check, prepare and send out to people who are showing their Standardbred’s at a high level. She also maintains the New Zealand Standardbred Showing website and has now begun to oversee the new, exciting Livamol series entries.

The website holds up to date, key information for Standardbred show competitors and is a one stop shop for all the latest show updates with a full calendar for the upcoming season and information about upcoming series, ring etiquette, rules and schedules.

After another promising and exciting show season, Julie’s highlight has been seeing the numbers grow in the show ring, especially at A & P level.

“I was impressed by the support of the Standardbred ring at A & P level by competitors and by the shows, especially those new shows who have been willing to run the section and give the breed a platform to showcase itself. It is pleasing to see all the work put in come to fruition.”

Although there is plenty of uncertainty in New Zealand at the moment, Julie is looking forward to the upcoming season and is hoping that the Standardbred rings will gain plenty of support once again. Although the Canterbury A & P show has been cancelled, the equestrian section of the show will still be run, allowing competitors who have been working towards the big day to still be able to compete.

“Just to actually be able to get out and compete would be great, especially after an abrupt ending to last season and the ongoing uncertainty of shows this season due to COVID-19.

“I would hope there will still be good support in the ring for the Canterbury A & P Show after the show itself has been cancelled. Due to being less shows available this season at the A & P level, I would expect competitors to make the most of what is available this season. I feel numbers have been good for many years. Show entries can always have fluctuations due to many various reasons.

The Standardbred Showing movement has been alive and well supported for many, many years throughout New Zealand, slightly longer in Canterbury where it kicked off well over 25 years ago. With more promotion of life after racing and classes at HOY, the breed is just getting more coverage.”

Julie believes that the breed has gained more respect in the show ring over the years because of a better standard of horse with the breed being more refined and also competitors having better knowledge of RAS showing standards and of course the training of the horse that is required.

This is reflected by the standard of horse attending HOY each year. Showing at this level involves a lot of hard work and dedication and is also an expense that should be budgeted and planned for well in advance. You also need to qualify to attend HOY so this should be considered at the beginning of the show season.

“You must be prepared to put the time and effort in as most competitors will know. There is also a large financial outlay, not in just travelling to HOY but in showing in general. I would encourage anyone wanting to compete at HOY to make a plan well in advance. This gives you time to start saving for the trip, working out what shows to compete at in the lead up and so on.”

Judging consists of 80% conformation and 20% paces and manners. The series is to show suitability of the breed as a riding horse in a life after racing.

Competitors are being encouraged to sign up now with the first show being the Northern (Rangiora) A & P show in late October.

“If the support is there in the future it would be great to extend the series into more shows like the Thoroughbred series. I honestly have no idea how many people will enter their horses but fingers crossed we will see it greatly supported.”

Whist the ambassador work keeps Julie very busy she also has her own small team of show horses who will be out and about again this coming season.

Eagles Nest (Inhand) and Nucleus VC (Inhand & Ridden) will both be out after a very successful show season last season.

Eagles Nest took out HOY in 2020, handled by son-in-law Brad Hamilton, which was a huge highlight for Julie last season.

As well as her own show team she is also part of the support crew for her granddaughter Tayla who is in the early stages of her showing career.

Show day can often involve juggling the two Standardbred’s in inhand and/or ridden as well as Tayla’s ridden classes. It’s a real family affair with all hands on deck.

“A huge delight is watching our granddaughter Tayla building confidence and doing well in her lead rein section.”

After years of commitment to the cause, in 2019 at the annual Harness Racing Awards Julie was deservedly recognised for all of her time and effort that she puts in to Standardbred Life after Racing.

Julie was awarded the Outstanding Contribution to Life after Racing award.

“I was very humbled to get the award, but it’s a lovely acknowledgement of a lot of time and effort that has gone into sorting out and setting up a framework nationally for the Standardbred Showing ring (breed performance cards, a nationwide set of classes etc, keeping in touch with all A & P’s to keep our section running every year and so on) since the breed became affiliated with RAS.”

Of course Julie wouldn’t be able to do this all on her own and there are a lot of enthusiastic supporters and promoters for the breed to ensure the horses are given plenty of opportunity to excel in a life after racing.

It is an exciting time to be involved in the Standardbred showing scene and hopefully with plenty of support the opportunities will keep getting bigger and better.