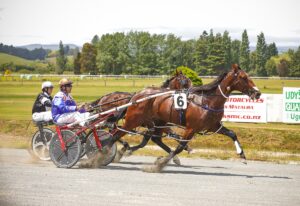 Cromwell breeder-owner Lester Smith already had a smart broodmare on his hands before her resume got bumped up a level with the outstanding win of Duke Of Cornwall (Sweet Lou) at Young Quinn Raceway yesterday.

The son of Sweet Lou and broodmare gem Galleon’s Honour produced a stunning performance when sitting parked for his entire mile (1609m) contest before cruising to a comfortable victory in the brilliant time of 1.52.6 for trainer Lauren Pearson and driver Matthew Williamson.

Despite his tough trip, Duke Of Cornwall stopped the clock just 0.4 sec outside the Young Quinn Raceway track record held by Kiwi On Show.

Smith admitted even during the running he wasn’t sure his pacer would be able to overcome sitting parked outside a smart type, in runner-up and favourite Hiranya, and still win.

“It was a great win, I am actually still a bit emotional about it,” the breeder-owner said yesterday.

“When he was out there (outside the leader) I thought hello, what is going to happen here.”

“But it was a brilliant performance.”

The two-year-old is the sixth foal and sixth winner from the Christian Cullen mare who Pearson also trained.

“She was a great buy many years ago, I have got a yearling full brother to Duke Of Cornwall out of her.”

“She left an Art Major filly this year and she has been served by Bettor’s Wish.”

Pearson has developed all of the progeny of Galleon’s Honour with her partner Brent Barclay.

Each of the previous five foals have won in Australia after being sold by Smith.