Irish-born Taranaki breeder, Fred Mitchell, is always hopeful that his beloved broodmare, Pennys A Flyin, will leave him a pacing machine like Im Themightyquinn.

And it was a son of Washington VC and Pennys A Flyin that gave Mitchell his sixth win from the mare at Alexandra Park last Friday.

It was foal number two (of seven) – Nelson’s Boy that triumphed for Waiuku trainers Bernie Hackett and Michelle Wallis. Their daughter Crystal did the driving.

“It was a special win personally because the horse is named after my late father. He’s finally coming to it. The Hackett/Wallis family have done a great job with him,” Mitchell said. 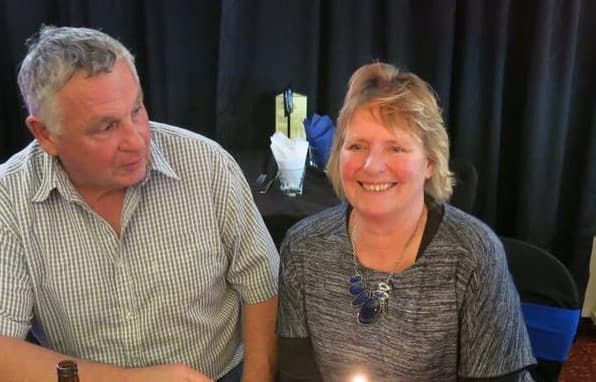 Mitchell said he left Pennys A Flyin empty last breeding season to give her a spell.

“She’s 18 and deserved a break after leaving seven foals since 2013. I’m not sure who I’ll put her to next season. It all depends on who retires first, me or her,” the Hawera horseman joked.

Mitchell had long admired the 1995 son of Presidential Ball, Washington VC. In fact, he liked the black stallion so much he sent Pennys A Flyin 420km south to Keith Norman in Gore to have her bred by him.

“I liked Washington VC and it was always my aim to breed three-quarter relations to Im Themightyquinn.

“Apparently Washington VC’s semen doesn’t travel, so I sent Pennys A Flyin down south to be served by him in 2012. It’s something that works very well. The foals then came back to me as yearlings. She’s still down there based at Macca Lodge,” Mitchell said.

The first three foals out of Pennys A Flyin were all served by Washington VC and then Mitchell had her served twice by Panspacificflight, Net Ten EOM, and more recently Sky Major.

“I own and bred the mare with my wife, Penny, so you don’t have to be a Rhodes Scholar to work out where I got the name for the broodmare from.

“She won a couple of races and Hold All Bets won three. His full Washington VC brother, Nelson’s Boy came next. He’s an old pet who has taken a long while to come to it.

“Early on he used to go real good at home and then was a slug on the racetrack. That win the other night proved to me he’s on the way up and starting to realise what racing and the racetrack is all about.

“I couldn’t get him to step away. He’d always break. Bernie (Hackett) phoned me and we did a 50-50 racing lease with his daughter, Tyla.

“Her sister Crystal drove the horse beautifully, said Mitchell who trains 99 per cent of his team at Hawera,” Mitchell said.

“The Hackett/Wallis family have been the making of this horse. He won well as favourite,” he added.

Bet on Steph, was the next foal, and she raced briefly before Mitchell tipped her out.

“She would stop at the 400 metres and we had no idea what was going on, so I spelled her and she’s come back bigger and better than ever this term. She has more speed than ‘Nelson’, but he has a better temperament.”

Mitchell moved Pennys A Flyin to Macca Lodge in 2017, and she left a Panpacificflight colt named Pennys First Flight.

“He’s a big giraffe. I tried him three or four times, but he’s just too big, so I’ve put him out for a while.”

“I’m working him now as we speak and he will need time, but he’s coming to it nicely. I also bred a Panspacificflight yearling filly named Pans Pretty Girl. I broke her in a month ago and she goes okay.

“The one I want to talk about is the Sky Major weanling colt named Fredy’s Boy. He’s an absolute picture, the best of the progeny so far, I think.

“He’s just come up from the South Island and looks sensational. That’s the difference between the Sky Majors and the Washington VCs. The Sky Majors look like they will go early, but with the other sire I’ve had to wait several years to get the best out of his progeny,” said Mitchell who owns motels in Hawera.

Mitchell bought Pennys A Flyin off her breeder Howick Jewellery when she was a foal. She won two races for him between 2008 and May 2012, and then he put her to the Southland-based stallion.

To say Mitchell is a character is like saying Lazarus could pace a bit. Typically, Irish he said he completely forgot his age and then suddenly remembered he was somewhere in his mid-60s.

He also said he missed his homeland, even though he was now a New Zealander.

“Sure, I miss Ireland, but I’m a Kiwi now. Geez I’ve been here since I was nine. Surely, I qualify? I love it here and I love racing.

“Oh and I forgot to tell you I recently bought a Riverboat King – Jonty Rose (Vance Hanover) mare off Gavelhouse.

“She’s in foal to Sky Major. I’ve really taken a fancy to that stallion,” said Mitchell in his brilliant ‘could listen to him forever’ Irish accent.