Fertility under the microscope 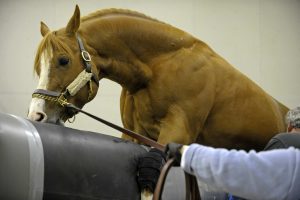 They say in life it’s not about the destination, rather the journey itself.

Who doesn’t love a detour on a roadie?

What started out as a simple review of the trotting stallions available by frozen semen and their ability to produce live foals took me down a few unintended rabbit holes.

Let’s keep it relevant and just say I broke stride.

Being an amateur researcher at best, I wasn’t able to get back down and trotting.

More of the curious type, I ended up somewhere between the advertising hoarding and the outside rail and was promptly pulled up.

I have every intention of finishing what I started: however my findings, if you can call them that, are no less relevant to an astute audience of breeders and industry participants, even if they are incomplete. Perhaps the naïve view has some merits?

In the current breeding climate, where the number of mares served is being challenged by a variety of factors, it would seem that:

For a mating to produce a racehorse, we need to start with what happens at the front end of the process.

Therefore, it is important that we engage and educate breeders with accurate and relevant information and/or data to allow them the opportunity to make informed decisions when it comes to breeding their mares.

There are two partners in this little process:  a mare in good reproductive health, and a stallion producing bullets that hit the target. Lets deal with the mares another day.

We know for a fact that frozen semen produces lower conception rates than fresh or chilled semen for a number of good technological and biological reasons.

Just as we know for a fact that certain semen bases and equine vet clinics get a higher percentage of mares in foal compared to others with chilled and frozen semen. Well we actually don’t know officially who is good at getting out mares in foal, do we? But the studs do!

Again a question for another day but NZSBA has commissioned research on the in foal rates from the major studs, with their cooperation.

This is why studs like Woodlands and Alabar and NRS offer 20% discounts on service fees for choosing their ‘preferred’ semen bases for the place of service.

The kicker here is that to determine success in the breeding process, you are merely reliant on a conception taking place.

The contractual obligation between breeder and the stud providing fresh or chilled semen is for the most part payable on receipt of a 42-day positive test.

That is, did the service produce a viable foetus at 42 days or not?

It’s a fairly simple ‘yes’ or ‘no’ objective measurement. Right?

When it comes to measuring (or rather not measuring) stallion fertility in New Zealand, the same cannot be said.

With less than 2,300 mares being bred from, it is something the breeding sector needs to be able to accurately report.

The problem is when data is rubbish in, it is invariably rubbish being distributed out.

We don’t want that, and neither do you.

We need an overhaul on what we are currently reporting and recording if we are to get a true picture of whose spunk is junk.

What we have now is an inaccurate measurement due to a process that is overcomplicated, archaic and technically speaking asks the wrong questions.

The reporting of stallion ‘fertility’ in our studbook is done on the HRNZ Infohorse system under the guise of ‘live foal percentage’.

Better put, was there or was there not a live foal produced as a result of the breeding decision and notified to HRNZ. Wait a moment, lets think about that. We measure a stallion’s success a year after a breeding, and if the breeder says there was a foal she/he wants to register!!!!!!!!

This measurement lets everybody down, whether it be the breeder, the stallion or the stud involved. I want to expose some light on the current situation in hope we can see some changes.

I ask the question, do we need to put greater emphasis on conceptions, the same way they report and record stallion fertility in North America.

Being the novice I have asked a few people for their views.

It seems that evaluating fertility by motility, DNA, abnormalities etc does not really work from the scientific view.  Some stallions that look OK under a microscope can be sub- fertile and vice versa. And, effective testing is not easily available.

Someone then said to me lets measure every cycle that a mare is served. “Then the per cycle rate of conception and the overall conception rate would be there to make informed decisions.”

But hold the mare for a moment: what about those who try to go early in the season, for good reason? Recording each cycle for a problem mare could badly and unfairly deflate a stallion’s performance stats.

Recording each cycle could be done online within Infohorse’s breeding programme each day. But and it is a very big ‘but’, would it improve the quality of the data on productivity of a stallion? Perhaps not.

Currently a stallion is only recorded as having served a mare once, and the only chance of a mare showing multiple serves in the system is if she is served by a different stallion in the same season.

HRNZ is heavily dependent on the studs to accurately and honestly report all services, not necessarily multiple services, but just that services happened in the first place.

There are commercial advantages and financial incentives to not report a failed service.

The current process is that a stud pays a fee to HRNZ to record each service. If there is no return for a ‘not in foal’ after one, two or three cycle then the fertility of the stallion is enhanced a year later.

I’ve been told while researching this dark ‘art’ that in times past with manual systems some stallions had their fertility enhanced significant by the denominator being somewhat lets just say lower than it actually was when the foal returns were filed in February.

If you had a stallion with fertility issues known only to you the stud, what incentive is there to tell the truth? In some cases it would be easier to record nothing. You pay nothing and the stallions ‘fertility’ looks better at year later.

Fertility skulduggery has been going on since the arabs were breeding mares in the desert and this is nothing new. With frozen I think the issues become even more magnified.

The odds are already drastically reduced anyhow, the costs are higher and therefore the accurate reporting around the fertility and quality of the semen becomes even more imperative to the breeder when making the decision to begin with.

There are two ways for HRNZ to be made aware of any silly buggers. Firstly, breeders can rigidly check their mares on the Infohorse system to see whether an official service has been lodged. Or secondly, for the rules to be changed to record each breeding cycle, but that is potentially unfair to the stallions as it blames them for all conception issues, including those of the mare.

HRNZ are not clairvoyants and are not responsible for guessing what did or did not take place.

For the most part, the studs are excellent with their data capture and returns.

The cost of breeding to frozen is significant but so too is a mating to fresh and chilled. Even more valuable than money when it comes to the breeding season is time. Failure to produce a foal is a significant cost to all breeders.

So, lets get back to our opening. One of the first glaring holes in the current system is to measure stallion fertility when foals are registered.

Lets for a moment think about recording in Infohorse through the stud programme a conception. Is it that simple?

Studs invoice their clients on a conception for those paying of a positive test. For those on live foal payment it should be an easy software modification to add a checkbox to tick “42 day in foal’”

At this point the stallion has done his job and the mare hers.

If after this magical date the mare loses the foal, the foal dies at birth or a breeder simply decides not to register it the stallion’s public performance it not diminished.

Just to be clear under the antiquated measurements in the current system if a mare slips a conception or loses a foal before registration the stallions stats are impacted.

Hope you’re not confused. It’s just another anomaly that perhaps we need to tidy up if we hope to get it right, which I think we agree we do.

So perhaps lets think about recording in Infohorse from this season whether at 42 days a breeding resulted in a conception. Simple?

Another failing in the system and a glaring waste of efficiency is the recording of no-returns.

Where fresh and chilled semen is concerned, a stud knows at the conclusion of the breeding season whether a mare is in foal or it has missed. For the most part anyway. After all, it’s how they invoice and get paid.

Therefore what logical reason is there that we cannot list at time of mare returns those that they know for a fact have missed getting in foal.

It would save the sending of a letter and the breeder being charged a $1 to return a form saying the mare was not in foal.

It would also save the potential whereby we have seasons which there are dozens of no-returns outstanding from several seasons ago.

There is also no current system to chase up these historical lapses.

It is imperative that breeders have access to accurate information which allows them to make an informed breeding decision, at the outset of the breeding timeline.