Skip to content
Stanbury: we love the sport and the people involved!

Stanbury: we love the sport and the people involved! 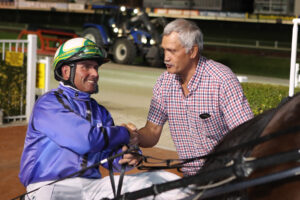 Long-time servant of the Akaroa Trotting Club, Colin Stanbury, has bred his first Addington winner and first in New Zealand since February 17, 2012.

His personal milestone came in race three when the Terry Chmiel trained and Blair Orange driven, U R The One (Sweet Lou – Lifes Just Magic – Life Sign), justified his $2.30 favouritism by a neck.

“I’ve always wanted to breed and own a winner at headquarters and now I’ve done it. I was so pleased. Who would have ever thought I would breed and own the favourite in a race at Addington, and have New Zealand’s leading driver in the bike.

“Terry said the horse was unlucky last start and we half-expected the win, but it’s only really starting to sink in. I’ve wanted to breed an Addington winner since I got into breeding in 2004. I know how hard it is to get a horse to race at Addington, let alone win one there. I’m very proud. Geraldine (wife) and I are so grateful to everyone concerned,” Stanbury said.

U R The One, a 4-year-old Sweet Lou mare, is the only foal out of the late unraced Life Sign – Magic Flute mare, Lifes Just Magic.

Her younger half-brother – Te Rauparaha (by Artiscape) provided Stanbury with his last breeding victory. That was at Banks Peninsula just over a decade ago.

The bay gelding was exported to Australia in July 2012. He won his last race at Pinjarra (Western Australia) on May 8, 2017, 2016. In fact, that was one of six races Te Rauparaha won in Australia.

“He‘s the best I’ve bred so far, but hopefully this girl will win a few more. I bought both Lifes Just Magic and Te Rauparaha’s dam (Magic Flute) off Mrs Holmes simply because I liked the Freeman Holmes breed,” Stanbury said.

Magic Flute, a one-win 1998 Falcon Seelster mare was the, was the first foal out of the 1990 Smooth Fella – Pan Flute (Noodlum) 13-win ($104,259) mare, Pipes of Pan. Her biggest win came in the Premier Mares Championship at Alexandra Park on January 10, 1997. A year earlier she placed in the North island Breeders Stakes.

“I bought Magic Flute off the Freemans simply because of her maternal breeding. I got her from the All Aged Sale when she was four.

“U R The One is the great-grand-daughter of Pipes of Pan, and I was told once that if I stuck to the breed the maternal lines would eventually come through – and now they finally have.

“I’m so pleased she’s a filly, because we lost the other two foals out of Lifes Just Magic, and because of her I can still carry the family line on,” he said.

The Stanbury family have farmed out of Little River for generations. In 2010 Colin and Geraldine retired to Lincoln.

“We’ve always taken a great deal of pride in our farm, and harness racing has always been a passion, but one we want to carry out well.

“We are just pleased to have this mare. She’s only four, so she’s got a few years racing left in her before we send her to the broodmare’s paddock.

Stanbury has served on the Akaroa Trotting Club for 29 years, was made a Life Member last year, and has also had his four-year stint as president.

Geraldine, his wife, has been secretary at Akaroa for 33 years and also has the same role at Nelson. She also served 20 years for the Banks Peninsula Club and five at Kaikoura.

“We love the sport and we love the people involved. That’s why we have given so much time to harness racing,” Stanbury said.

The Stanburys have been married for 39 years and have three children and three grandchildren.