Skip to content
Stellar start to October for Stiven

Stellar start to October for Stiven

It’s been a stellar start to October for Arden Lodge principals Judy and John Stiven. 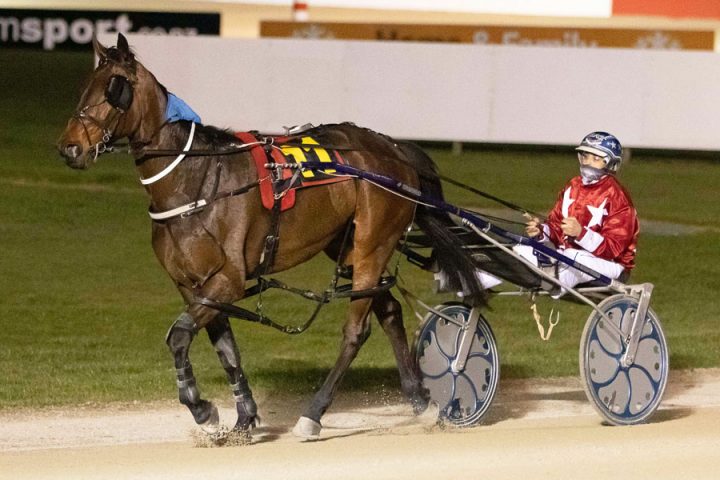 South Coast Arden after his win in the Gr. 2 Canterbury Classic at Addington

On Friday 1st, farm graduate South Coast Arden continued his winning ways when taking out the Gr.2 Canterbury Classic (2600m) at Addington Raceway and last Tuesday evening his dam, Southwind Arden, took out the Broodmare of The Year title at the Southland awards.

“It was Arden Lodge’s fifth Broodmare of the Year title at the Southland awards. We are very proud of that honoured title,” Stiven said.

Last week, South Coast Arden picked up where he left off, winning first-up for trainer Brent Mangos after rounding out last season with a sizzling 1:51.6 time in the Gr.1 Harness Jewels 4YO Emerald (1609m) at Cambridge Raceway in June.

“It was sensational. He’s done a great job,” Stiven said.

Southwind Arden, the winner of nine races herself including at stakes level, is continuing a strong lineage at the Southland breeding operation.

“She is a daughter of New Zealand broodmare champion Winter Rose and she was one of the earlier crops of Bettor’s Delight,” Stiven said.

“And she is a full-sister to Bettor’s Strike who won nearly $1 million.”

Reflecting on the mating that resulted in South Coast Arden, Stiven said he had always been a massive fan of his sire, Somebeachsomewhere.

“I am Somebeachsomewhere’s biggest fan Down Under,” he said. “I was fortunate enough on a couple of trips up to America to be able to give the big fella a pat.

“I was really keen to get some fillies by him, which we have, and we have had a few great colts that have given us a good return (at the yearling sales).

“He has been very good to us.”

Stiven sold South Coast Arden at the yearling sales and he has continued to follow his racing career with excitement.

“He went to the sales and made $70,000. He was a lovely colt and Phil Kennard and Brent Mangos bought him,” Stiven said.

While Southwind Arden has been represented by the likes of South Coast Arden in New Zealand and Platinum Stride in Australia, it hasn’t been all plain sailing for the 13-year-old mare.

“She has had a wee bit of bad luck with some of the foals,” Stiven said.

“Just over a month ago unfortunately she had a foal coming backwards and it died inside her.

“We had the vets in to take the foal out. Fortunately we were able to save the mare.”

While disappointed with the loss, Stiven is looking forward to the yearling sales next year where he will be offering a Captaintreacherous filly out of the mare.

“She is a lovely filly going to the sales,  a lovely, strong type like South Coast Arden,” Stiven said.