When it comes to getting new owners hooked on harness racing, the Stonewall Stud team could not have dreamed of a better start to a racing ownership experience. 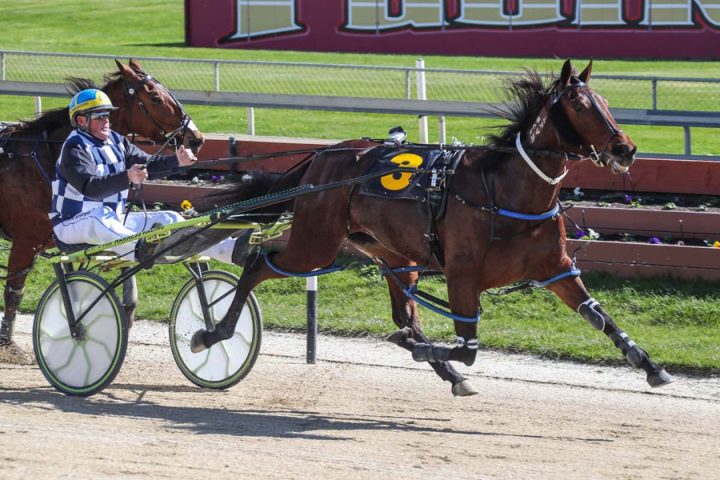 Currently with nine winners and sixteen placings to their name for the season, trainers Steve and Amanda Telfer have already given their syndicate members multiple thrills, and are sitting in third equal position on the national trainers premiership.

Syndication had previously been a part of the Stonewall ownership model with its fillies, but it was a move to purchasing at the yearling sales that saw the promotion side flourish.

“We started the syndication as we were looking to expand our ownership base, we have been syndicating our own fillies for many years now and found that it is hard to get new owners to take on large shares,” explains Jill Stockman, co-owner of Stonewall Stud.

“So what we have found is that we will go and buy yearlings from the sales, and syndicate them from there. Last year that we probably didn’t get the advertising thing quite right, so this year we were really on the ball and had the ads in the newspaper by early March, from that we got an immediate response.”

Jill found that once the myth around the affordability of ownership was dispelled with the syndication model, it made it easier to get new owners to the game onboard.

“Syndication has made it affordable for everyone, and we have had new owners come onboard when they knew it was easy to get involved. They’ve really enjoyed the experience. The people that got involved last year were happy and came back on board again this year. It’s great to see.”

To be able to share the winning experience with others and make new friends has been an even greater success in Jill’s eyes.

“We have a group that go to the races at Auckland every week, and they have made some great friendships.”

“We are just wrapped we were able to get some wins for our new syndicate members, they are over the moon. It’s a shame they can’t be on course as much at the moment with Covid, but I got an email from a lady in Tauranga after Show Me Heaven won last weekend at Addington, and she was just elated.”

With Cyamach the most successful yearling sales purchase, earning over $500,000 for the team, Stonewall Stud will be hoping they have found another like him in their recent purchases.

Now with a new barn currently being built on the farm, and the size of the training operation growing, Stonewall Stud have opted to have their mares foal off farm.

The Stud retains a majority share in their fillies when racing, and have been able to breed from some mares with outstanding track records, including mares they have bred themselves.

Stonewall Stud were also the breeders of Dancingonmoonlight, who they sold as a two-year-old and went on to earn over $400,000.

Bettor B Amazed was bred by Stonewall Stud, and amassed an outstanding total of 18 wins in just 50 career starts.

The daughter of Bettors Delight was a winner of the Group Two Premier Mares Championship as a five year old, and has had a yearling filly by Art Major, and also recently foaled a filly by the same sire.

13 race winner, Step Up, has been racing in Australia and will retire to the broodmare paddock this spring.

“Step Up was raced with one of our big syndicates and we have left her in Australia to be served by Captaintreacherous, and then she will come home,” Jill said. “We are extremely excited to send her to a stallion like him, given the amazing job she has done for us and the syndicate on the track.”

And when it comes to the important task of matching mares with the right stud, that’s left up to Jill’s expert judgement.

“I pretty much do all of the stallion selection. I will work out who I think we should be going to, and then the team will have a meeting to talk it over.”

“I like to have a look at the pedigrees and do a bit of research, I really enjoy that aspect of breeding.”

“There are certain crosses I like to see. History is a great tool when it comes to showing us what works and what doesn’t. I like to follow a lot of what is happening in North America and that helps with making up my mind.”

And for Jill, there has been one stallion of particular interest to her in the upcoming breeding season, despite her usual selection criteria.

“We don’t often go to first season stallions, but we have supported some in recent seasons. And this year we are breeding seven to Captain Crunch. We are really excited to be able to get our mares into him at a reasonable price.”

“This year I have elected not to breed to stallions based in Australia, just because of the uncertainty with the delivery of semen at this stage with what is going on with Covid. I was very happy to see he will be standing in New Zealand.”

Jill’s attention may be on the North American harness racing scene when it comes to breeding, but the team have had other reasons to tune in of late too.

“We watch quite a bit of the racing in North America at Woodbine and the Meadowlands, and since we sold Ivana Flybye up to Canada we have formed a great relationship with her new owner, Mike Tanev. Which has actually resulted in him buying in to her half-brother by Downbytheseaside,” Jill said.

“It’s awesome to make friends all over the world through harness racing, and we even have syndicate members in America, Canada and all over Australia. It’s just so cool to have people involved with a common passion for the sport.”

So where is this breeding and racing journey headed for Jill and the Stonewall Stud team?

“My goal as a breeder would definitely be to breed Group One winners. That’s the dream anyway, and hopefully one day we’ll be able to do that and share the excitement with all of our owners.”

“But the best part about being involved in the breeding industry is to see a horse win a race, no matter where it is. To be involved in the stallion selection, the breeding, and raising a foal right up to becoming a racehorse is such a wonderful journey, it really is so rewarding.”

Of course, with the highs and lows of harness racing and being involved as a breeder, Jill knows exactly how hard it is to label one horse above another.

But she appreciates the sentimental highs when they arrive.

“I don’t really have a favourite win as such, but any time that Parker wins it is always special, he was a foal that we had to get a foster mare for. That makes it all worthwhile right there.”