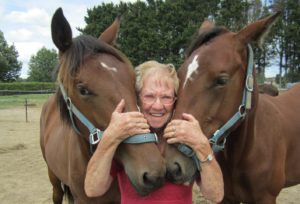 Lyn Messenger with two of her beloved Standardbreds

The Messengers’ back in the winner’s circle after six years

The ‘royal connection’ has ensured another victory for Taranaki breeders, Alan and Lyn Messenger – some six years after they last tasted success.

It was the bay filly’s first win in four starts. She’s also placed three times. Her mother, Princess Kate, won eight races and $51,833 from her debut at Wanganui (December 15, 2013) to her last race at Cambridge Raceway in August 2016.

“We obviously named the dam after England’s, Princess Kate. The mare was born on the day the royal couple announced their engagement. That was November 17, 2010,” Lyn Messenger said.

“Her eight wins – one more than her mother Attsa Nice – meant both those mares fuelled our fire for the sport,” she added.

Mrs Messenger explained that they were late starters, not getting into the sport until they were in their mid-60s and 50s.

“When we did get into ownership early on, we thought wouldn’t it be great to win a Messenger one day. How ironic that would have been!

“Attsa Nice was also trained and driven by Nicky Chilcott. We have been with Nicky since day one. We originally had gallopers and then one day at the New Plymouth races Alan went up to Nicky and asked her about getting a harness horse.

“Nicky gave us a stud book and we haven’t looked back since.

We value what Nicky does. She is a wonderful horsewoman, and we have always remained loyal to her,” Mrs Messenger said.

The Messengers bought the now 20-year-old Presidential Ball mare, Attsa Nice, at the 2003 Yearling Sales at Karaka, and raced her with Chilcott. Mrs Messenger said they bought the mare because of her breeding.

“Her dam, Heather Laurique (by Holmes Hanover) also won six races and Nicky gave us some good advice. Attsa Nice finished racing in 2008 and then in 2009 (October) she left us her first foal,” Mrs Messenger said.

Her first foal was Lyn’s Delight (2009), who won two races and then along came Princess a year later.

“The mare left us seven foals all up, and those first two foals are the only two we are breeding from now.”

“Then the second foal – Katies Princess was born in October 2018. We put her to Raging Bull because he was all the talk at the time, and he was going pretty good.

“I think he has done a good job, especially producing this girl. Nicky really likes her. She was given time out after she qualified to bulk up,” Mrs Messenger said.

Katies Princess qualified at Cambridge Raceway on June 11 last year and then finished third on debut at the same track on January 13 this year.

We were hopeful she could win because she had placed in her other three starts, but we also knew that there was a bug go through the barn and some horses were still recovering.

“It was a great drive by Nicky. We watched the race from home and were very proud of them both. Nicky has always been our trainer. When we got into the sport Alan always wanted a female harness racing trainer,” Mrs Messenger said.

“She’s at Nicky’s Mum’s place grazing at the moment. She is a lovely bay filly and will need a bit of time. We are not sure if she will make a 2-year-old. We don’t race too many 2-year-olds,” Mrs Messenger said.

“The last foal out of Princess Kate is a 2020 He’s Watching colt named Says Who. He’s just been broken in and is also with Nicky,” Mrs Messenger said.

The Messengers have scaled down their dairy farmer. They live between Inglewood and Egmont Village.