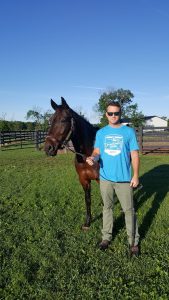 Career opportunities in the New Zealand standardbred breeding sector are often few and far between, and not for the faint of heart.

Long days (and nights) working with livestock in the ever changing but prosperous climate that the rural New Zealand landscape affords comes with many challenges.

They do breed them tough in Southland mind you, and for well over a decade, Nigel Fahy has made every post a winner once deciding that working with horses was the career for him.

Having recently assumed his position as the newly appointed Farm Manager at Breckon Farms in Ohaupo, the 36-year-old Southlander has had a rather serendipitous journey to the top of one of New Zealands leading breeding operations.

“You pretty much walk into any paddock with mares in it and there is either a Group One winner or a Group One producer. It is quite cool working with such high-quality bloodstock,” he said.

Growing up on a 300-acre sheep and beef farm in the small rural Southland town of Woodlands (about 15 minutes from Invercargill they tell me) fostered a lifelong passion born from his parent’s hobby of breeding Standardbreds.

“Mum and dad breed all the ‘Raka’ horses,” said Fahy referring to the moniker his parents Barbara and Brendan Fahy give their well-bred pacing stock.

“With mum and dad breeding a handful each year at home I was always around them and went to the races quite frequently as a kid and was always quite excited following their horses around.

“When I was eight we had a Group One winner up in Auckland called Stands To Reason who won the Nevele R Fillies final in 1990. I think it’s dad’s only Group One winner to date and I still remember listening to that race on the radio,” he said.

Seven-year-old Rocknroll Hanover mare Rakarazor might be the most memorable in recent years having been the best of a bunch of fillies not wearing All Stars colours in the Three-Year-Old Diamond at Cambridge in 2016.

Rakarazor was the rank outsider of the field having drew out in the carpark, yet the speedy filly finished on well for 4th behind a quartet that included Piccadilly Princess, Golden Goddess and Dream About Me.

Success goes a long way in securing the interest of the young and impressionable, and Fahy found himself on hand as a teenager helping with weaning and feeding the horses in the boxes when he could.

Knocking round with horses was far from his mind when Fahy decided to head up the road to study in Dunedin.

“All my mates were going to University at Otago.I didn’t want to miss out on any of the fun up there, so I enrolled and studied Sport Management at the Otago Polytechnic.

“I tried my hand in following that line of work and was contracted with Rugby Southland at one stage but I couldn’t really break into a role as a sports team manager. I ended up moving to Melbourne to try and have a crack over there but it always seemed to be who you knew, not what you knew.

Having come back to help his father on the farm, Fahy found himself at a crossroads as to what he wanted to do with his life. He had always enjoyed working with the horses, but had no experience outside of working with his own. An inspired Google search quickly put pay to that!

“I got up in the middle of the night and googled top 10 harness racing studs in North America. I sent my CV to half a dozen of them and Seelster Farms were the first to reply amongst others saying they would be happy to take me. Within a week, I was on my way to Canada and spent two years working there,” said Fahy.

They currently stand eight stallions including Sunshine Beach and Big Jim while breeding from 64 of their own broodmares with most of the progeny aimed at the yearling sales.

“One of their marquee stallions at the time was Camluck who was a superstar when I was up there,” said Fahy.

“I started out as a foal watch attendant just doing lots of night shift work, but I liked sticking round in the mornings and helping with the collecting of the stallions. I got a bit of a thrill out of looking after these superstar race horses which would go on to become successful sires,” he said.

“After two years, up there I came back to New Zealand which led me to my previous role at Alabar as their stallion manager,” he said.

In moving to Alabar, Fahy teamed up with a man who had been involved in the business longer then he had been alive in Graeme Henley, and who better to learn from in this part of the world?

“Graeme was really good to work for. He used to be on the Sires Stakes boards with my Dad and he was great for me, always easy to talk too and him and I got on really well,” said Fahy.

Having handled a supertsar like Camluck, the opportunity to work with the star-studded roster at Alabar NZ was a natural stepping stone.

“Mach Three was the obvious one, he was always good to do stuff with. Real Desire was there when I first started and he was a nice horse to be around as well, but Mach Three knew he was the top dog.

“When you clipped the lead onto him to walk into the breeding shed, he would be roaring and yelling and letting everyone know he was there, but he was never a nasty horse or anything. He would just head in and do his business and go back to his paddock and eat grass. Majestic Son is quite a neat little fella as well,” said Fahy.

While their pedigrees are flashy and race records speak for themselves, dealing with a half tonne of testosterone wouldn’t be without it’s challenges?

“There were one or two stallions that were a bit hairy and had a few close calls with, but nothing major. We would obviously wear a safety vest and a helmet and you get use to the physicality of it. They do push your around a bit, you just have to respect them and don’t let them get away with too much,” he said.

As mentioned previously, opportunities are a bit scarce when it comes to standardbred studs in New Zealand.

Having successfully completed 10 breeding seasons in his role at Alabar, an opportunity to spread his wings presented itself with the farm manager role at Breckon Farms being vacated by the long-serving Scott Yarndley.

“I talked it through with Graeme actually and he encouraged me to go for it and was supportive. He recognized it would be a good career move for me and a good step forward and wished me all the best,” he said.

Breckon Farms need little introduction as the largest stud in New Zealand not currently standing a stallion. Ken and Karen Breckon’s investment in the standardbred industry is Australasia wide and seemingly peerless. The opportunity to oversee the operation on farm wouldn’t be a difficult one.

“The first couple of months has pretty much been a whirlwind trying to get my head around the operation and processes. While it’s the same in the sense of breeding standardbreds like we were at Alabar, there are different ways of doing things and different staff so just finding a happy medium has been key.

“The great thing about working for a couple like Ken and Karen is that they are really open to change and improving things. As the time comes I’m sure we will look to identify any opportunities that we continue to adapt and raise the bar further.

In his short time at the helm, what are some of Fahy’s early takes on what makes the Breckon breds such a force at the sales and on the racetrack?

“Aside from the world class bloodlines, the farm has about 55 hectares and a lot of good quality stock comes off this farm. That is attributed to both the systems in place by way feeding and preparing, but similarly the land and the rolling countryside. It’s great for the development of muscles on young horses,” he said.

“We have anywhere between 60 to 70 mares that are both ours and client horses. We probably have 50 yearlings on the farm of which 35 will go to the Yearling Sales next year.

“I’m quite excited about this coming yearling sales as well, Philly Higgins Drysdale is the Yearling Sales Manager here. They had a brilliant sale last year so I don’t think there is much for me to change or worry about,” he laughed.

“In the past, I’ve prepared one or two for Alabar and did quite a few yearling preps in North America and I’m really looking forward to the thrill of being part of that again.”

Prior to the commencement of the Breckon Farms role, Fahy found himself once again destined for North America with another opportunity to ply his trade at a world class facility with several equine superstars of our sport.

“Diamond Creek Farm were after a Stallion Manager for a couple of months. Shaun Thompson from Nevele R Stud went up for the first half of the season and I went up for the second half. We looked after their stallions and they have some amazing ones on their roster along with their high-quality yearlings and broodmares,” he said.

Diamond Creek Farm is situated in Pennsylvania and owned by Adam Bowden, a big supporter of the New Zealand standardbred industry with his shuttle stallions and race sponsorship.

His stallion roster includes the likes of Always B Miki, A Rocknroll Dance, Downbytheseaside and Sweet Lou on the pacing side. The trotting ranks are world class also with Father Patrick, Southwind Frank and Creatine, all with their names on the gate.

“It was a good experience with really nice people. We were based in the middle of Pennsylvania which wasn’t near one of the big cities or anything like that but a really nice bit of the countryside and really nice people to work for and I made quite a few good friends up there.

“I managed to get around a few farms as well and went and had a look at Hanover Shoe for a day which was quite impressive. They are a name synonymous with harness racing and have the horse flesh to boot. Captaintreacherous was in the front center paddock and he was impressive in the flesh. They also stand the likes of Andover Hall, Donato Hanover and Western ideal was there as well.

“On a day off I took the chance to drive to Southwind Farms in New Jersey and was allowed the opportunity to handle Muscle Hill. He’s a real laid-back customer and a beautiful animal. They also had Tactical Landing who is a big strong strapping lad,” he said.

It’s incredible to think that an inspired google search has taken Fahy on a journey that encompasses some of the greatest stallions and studs the world over, and has led to a career many could only dream of.

Not bad for a lad from the banks of the Waihopi River.