Rosemary Tims late mother, Molly, would have been beaming from above following race one at Alexandra Park last Friday night (February 18).

Molly Belle, (Pegasus Spur – Mollyz Luck – Monarchy) mare, named after her Mum and grand-daughter, got up by a nose in the R43 to R53 Trot. She was driven by Tims’ long-term trainer James Stormont. 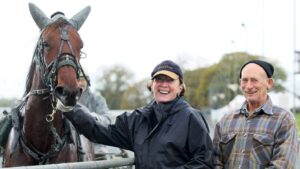 The bay mare is owned by the Tim Tams Syndicate, which comprises retired Matamata dairy farmers, Brian and Rosemary Tims and their four grandchildren.

“We name most of our horses these days after our grandkids, but being out of Mollyz Luck, we thought it was appropriate to carry on Mum’s name.

“After all it was Mum and Dad that got us into harness racing bout 30 years ago. Molly Belle is the grand-daughter of the Tims’ foundation mare, Howz Lucky – the only foal left by the unraced 1989 Great Heights – Mighty Mir (by Gerry Mir) mare, Great Memories.

“Mum (Molly Primmer) owned Great Memories, but sadly Dad (Kelvin) passed away before that filly was born in November 1989. Dad was a good horseman, who trained many winners.

“After dairy farming since he left school, Brian decided to give breeding a go. We were left with Great Memories on our farm and she left us just one foal – Howz Lucky (1989 Sundon mare). We tried to get her in foal again but had no luck, ” Mrs Tims said.

“Thankfully we were able to breed on from that one foal and Howz Lucky (five wins) left us 11 foals from 2006 to 2018. Molly Belle is out of foal number four – the five-win 2009 Monarchy mare, Mollyz Luck,” Mrs Tims said.

She said every foal the mare had left had been a winner except for Rosemaryz Luck, and a 3-year-old, Pegasus Spur colt, Hughie Wallace, who is yet to race.

“Madisonz Luck, who is named after my granddaughter, would be the best horse Brian and I have bred or owned.

“She was a wonderful mare who placed twice in Group one races. They were the Harness Jewels 2yo final in 2010 (second) at Cambridge, and then the following year she ran third in the Northern Trotting Derby at Alexandra Park,” Tims said.

She said Mollyz Luck had left three foals – all by Pegasus Spur.

The first two were bred by Woodlands Stud, but Molly Belle is the mare’s only winner. Sadly, the second foal, Irish Eyes, suffered from a severe bout of colic.

Mrs Tims said Molly Belle was passed in at $12,000 at the 2019 NZB Standardbred Sales at Karaka. The Tims had no horses for sale at this year’s Sale.

The Tims are also breeding from two daughters of Howz Lucky. They are Mollyz Luck and 2007 Armbro Invasion 11-win mare, Madisonz Luck.

“Madisonz Luck is empty at the moment but we bred a lovely What The Hill weanling out of her as well as Monsinee (2015 Lucky Chucky mare) and a 2018 Orlando Vici colt named Run Forest Run. We sold them both to Lyn and Andrew Neal.

“We will keep breeding but I think the days of us breaking them in and preparing them for our trainer is coming to an end. We are not getting any younger, but still very much enjoy breeding and racing them.

“James said Molly Belle would have improved a lot from her last start seventh. We couldn’t make it to the track because of Covid but I think you could hear us cheering from our lounge,” Mrs Tims said.

The Tims have two sons David and Shane. The former took over the family farm 15 years ago allowing his parents to retire to harness racing.

“My father-in-law (Kelvin) and mother-in-law (Molly) got me hooked. Howz Lucky made it all very worthwhile,” Mr Tims added.

Tims, who drove a winner in 1977 and 1980, said his grandfather had trotters and his father was also into the trotters.

“If it wasn’t for Kelvin, I might not have ever got into harness racing. I always liked it but when he gave me my first drive behind a horse I became instantly hooked,” he said.