Time In A Bottle thriving on grass track training 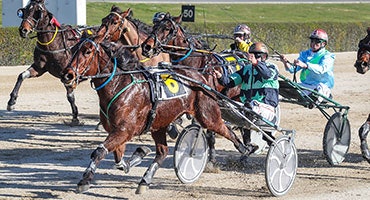 Time In A Bottle continued her brilliant form for Geraldine couple John and Sandra Mounce when running to her third win in four starts at Addington on Sunday.

Just a week after downing All Stars filly and favourite La Reina Del Sur, the five-year-old returned to the same track to score a front-running win for driver John Morrison.

Time In A Bottle is trained at the Orari racecourse and is clearly thriving on her regime of grass track work.

“We are very proud of that young girl, she seems to love the Geraldine environment,” John Mounce said.

“She seems to like the big Orari grass track.”

“Michael and Craig Ward did a really good job with her in her earlier life.”

“Mike had her going really good at the trials, then one night at Addington she got a bit stressed and it turned out she fibrillated.”

“So, he wanted to see how she would go with a change of environment.”

“But, don’t worry, we have had a few problems with her.”

“She had a few starts where she went fair to mediocre here or there.”

“But she has come right.”

The couple have received plenty of well wishes during their run of recent wins.

“Everyone has been great, we have had a lot of people congratulating us,” Mounce said.

“Mark Purdon was in the wash bay beside us when she won last week.”

“He was very gracious and congratulated us on the win and said she had a nice turn of foot.”

Time In A Bottle’s form has her dam, Gina, becoming something of a star producer.

The five-year-old is the third foal and third winner from Sundon mare, Gina.

Though she only placed once in nine starts, Gina was thought highly enough of to compete in the Hambletonian Classic and the New Zealand Trotting Oaks.

“She had ability and had a nice turn of foot, but she was very highly strung,” Mounce said.

The 13 race-winning 12-year-old is back in work with at the Mounce stable after injury put a halt to his stellar career just over a year ago.

“I said to him you better watch out because your sister is catching up with you,” Mounce quipped.

“He is working quite good, I think we will keep him to the grass track meetings that are coming up.”

Gina has also left one-race winner, Cocktail Waiter, and has two more foals to progress to the track.

The Mounce family have a three-year-old filly by Superfast Stuart and a Creatine yearling filly out of the mare.

Gina is due to have a foal by Imperial Count in the coming weeks.