Skip to content
Trotter out to continue family legacy

Trotter out to continue family legacy 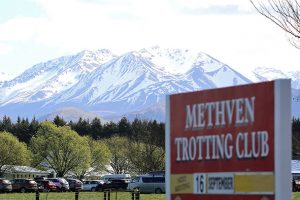 Regally-bred gelding Five Wise Men will make his much awaited debut in the Agstaff Trot (2400m) at Methven on Sunday.

The three-year-old trotter is a son of Muscle Hill and Group One performer Harriet Hughes, and a half-brother to 15-win mare Harriet Of Mot and Group Three performer Muscles Galore.

He pleased trainers Craig and Aimee Edmonds with his trial win over 2600m earlier this month and they are hoping for a bold showing on the grass from the gelding.

“It was a nice trial win, but he can get a touch keen at times,” Aimee Edmonds said. “When he is at the races and going a bit quicker hopefully he will learn to relax.

“Trials and workouts are a little bit different to race day, so he needs to take that step, but everything he is doing at the moment is positive.

“He is new to the races and is learning, but as long as he does everything right on Sunday he shouldn’t be too far away.

“He seems to be doing everything right and he is bred to run.”

Five Wise Men was bred and is part-owned by Ivan McNicholl who has been a great supporter of the Edmonds’.

His broodmare gem Eilish Mac has been a great source of quality square-gaiters for Craig and subsequently Aimee, which have included the likes of Group Two winner Ella Powell and top-class trotter Earl of Mot.

Edmonds also prepared Amore Stride for the yearling sales in 2010 where he was purchased by Emilio and Maria Rosatti for $140,000.

With a growing family, Edmonds has taken a more hands-off approach in the training partnership of late, but she is still enjoying watching their small team line-up on race day.

“I am pregnant and I am looking after my son, so I just go out when Dad needs me,” she said.

“He has got about three in work and a couple of young ones, so he is kept busy doing that and shoeing Robert Dunn’s trotters.”