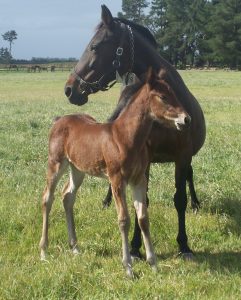 Out of a Game Pride mare by a former USA Trotter of Year and leading NZ trotting stallion of 1990’s in Chiola Hanover.

Bred by Meadowlands Breeding Ltd & Co (National Bloodstock Corporation offshoot); Chiola’s Lass was purchased at the sales by Denis Lauren along with Ian MacKay and Sean McCaffrey. After racing and the breeding of the first 4 foals, MacKay left the partnership and his share was taken over by Pip Gerard, who was then, and is now, the wife of Denis Lauren.

Chiola’s Lass’ progeny have left the winners of 77 races in NZ and Australia notably:

Thanks to Peter Craig