Deny Everything (A Rocknroll Dance-Lecerne Lil-Ginger Man) made a huge statement at Addington on Friday night and in doing so he continued to make up for lost time for his breeder-owners Damian and Neil Love.

The Mark Jones pacer had already made an incredible comeback from a 22-month break from racing producing a winning hat-trick going before contesting a feature handicap containing New Zealand Cup bound horses. 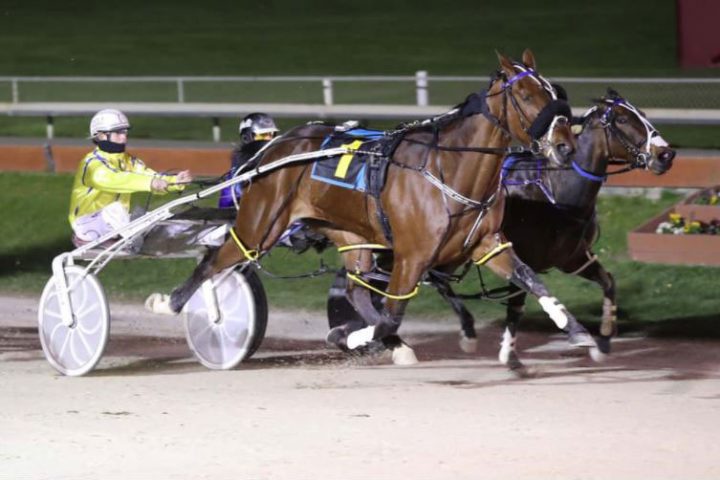 Deny Everything in one of his five wins on the trot dating back to November 2019.

The pacer took that comeback to another level and signaled he was on a pathway to open class with a brilliant front-running performance to beat proven group race performers to make it four out of four this time in.

Damian Love admitted after Deny Everything’s breakout performance, with driver Samantha Ottley, that though he always had faith in his horse’s ability he didn’t see this kind of comeback coming.

Deny Everything’s extensive break away from the track was due to a combination of factors. In his last campaign the horse required a minor operation, while he also battled soreness issues when trying to make it back to the track.

“It went back to him starting in the Cup Day maiden a couple of years ago. We thought there was something up but we didn’t diagnose it until later,” Love said. “We got that fixed up but then he went sore in a couple of different legs, really just because he is so big.”

The father and son pairing of Neil and Damian Love raced Deny Everything’s dam Lecerne Lil, the winner of two pacing races, from Andrew Stuart’s stable. The 21-year-old Ginger Man mare has a perfect record at stud having six winners from six starters. Among them are trotting winners Indefinite (Live Or Die) and Forgot To Remember (Lis Mara).

The pair explain why the next foal out of the dam of the most impressive pacing winner on a good night of racing at Addington is by a trotting stallion in Muscle Mass.

“She could always trot a bit and I always had in my mind I would like to send her to a trotting stallion,” Love said. “I had Indefinite out of her and I qualified him trotting and he got a placing but in the end I put him back to pacing.”

“So, I thought I might as well send Lucerne Lil to Muscle Mass. She has got a yearling by Vincent and I haven’t decided what to send her this year. She is getting old, this will be her last foal, but I will send her to something.”

If everything goes to plan the Loves’ two-year-old Muscle Mass filly could take her dam’s record to seven starters for seven winners.

“Mark (Jones) qualified her during the winter. She is a pretty nice horse, he quite likes her and she qualified really well.”

Damian Love is currently pre-training the filly ahead of her return to the Jones stable.

HRNZ’s Breeding Manager Brad Reid featured the breeding of Deny Everything in this fascinating exploration of his pedigree demonstrating that a good horse can come from anywhere.