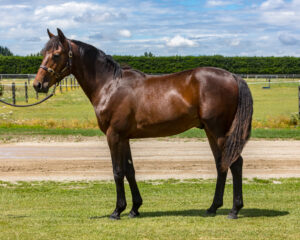 Though they were represented by small numbers, each rookie of the New Zealand sales arena produced success stories that they look set to build on in 2023.

Macca Lodge’s En Solitaire was a breakout performer in Christchurch.

The French-bred son of Ready Cash returned breeders many times his service fee when two of his colts sold at an average of $26,000.

Macca Lodge co-principal Brent McIntyre was thrilled with those results.

“He had been leaving some cracking types so we were hopeful the good judges would take notice.”

“The Moment Of Beauty colt we prepared is a really nice horse.”

“For one of the best in the business to think they were up to scratch was a fantastic result.”

“Both of those colts couldn’t be going to a better home with Tony.”

“It’s a great result for the stallion, hopefully now breeders will take notice.”

“We have a few of our own and they have broken in really nicely and look promising enough.”

En Solitaire’s two sales colts came from a crop of 18 live foals from the 2020 breeding season.

The Yabby Dam Farms owned stallion has 25 weanlings that could be aimed at next year’s sale.

Tactical Landing could not have made a better start to his yearling sales career in New Zealand when he topped the Christchurch trotting sale.

Tactical Landing also produced a strong result at Karaka with a colt from Classic Armbro selling to Graeme Rogerson for $50,000.

Those results helped produce a $63,000 average across three lots. 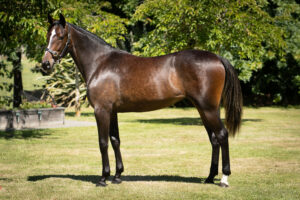 Tactical Landing’s representation at this year’s sales was clearly small, but it could get even smaller next year.

The Stallions Australasia sire’s yearling crop numbered 12, with just 10 weanlings on the ground that could progress to next year’s sales.

That’s a result of his North American owners wanting to restrict his numbers Down Under.

But what the stallion is leaving so far among those small numbers is clearly of strong quality.

“They tend to be leggy, he doesn’t have any coarseness to him,” Peter O’Rourke said.

“He is probably a bit finer than the average trotting stallion, he was an $800,000 yearling himself.”

“The owners only send down a limited number of straws, they don’t want big numbers down here but he has served more mares this year than he has in the last couple of years.”

Tactical Landing has 201 foals in North America compared to his 22 in New Zealand.