On the cusp of becoming just the ninth Australasian-bred trotter to reach the magical million dollar mark, Tornado Valley is agonisingly $203 short of attaining his latest milestone. Trainer Andy Gath advises that the star will have his next start early in the New Year. 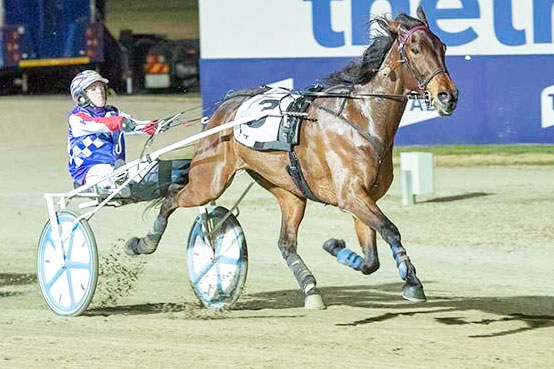 The nine-year-old gelded son of Skyvalley and Begin was bred by Mrs Petina Gaugler of Richmond and Ashburton trainer/driver Terry McMillan. Mrs Gaugler’s association with this particular branch of the Peri family (N21) goes back three decades to Tornado Valley’s third dam Chesapeake with an even earlier interest through fourth dam Susquehanna, part owned by her late husband Donald (Charlie) and trainer/driver Noel Berkett,

Noel Berkett, Petina Gaugler’s father, is best remembered for NZ Cup winner Mobile Globe and Auckland Cup winner Prince Polka, although he had a soft spot and considerable success with the square gaiters.

Petina has known Terry McMillian for many years, commencing with half shares in the racing progeny of Tornado Valley’s grand dam Bega. Petina credits Terry’s “patience and all the hard graft with Tornado Valley that has made him what he is today”. Racing in Petina and Terry’s interests, Tornado Valley amassed fifty seven starts in NZ for seven victories (two Addington) and 21 placings, $70,947, T2:02.0 over 3½ seasons before his sale to Victorian Norm Jenkin in February 2018.

It was obvious that the racing style in NZ didn’t entirely suit Tornado Valley, whereas a multitude of mobile start races in Australia would suit him down to the ground. In Victoria Andy Gath has handled the training duties, with wife Kate doing the steering from their Long Forest base 45kms from Melbourne in the federal electorate of Ballarat. Petina had been in Australia after the 2018 Melbourne Interdominions and visited the Gath’s property. She says the Gath’s simply “love Tornado Valley to bits”.

Twenty two of Tornado Valley’s victories have come at Melton (record for a trotter). He was Australian Trotter and stake earning Trotter of the Year in 2019, 2020 and ANZ Trotting Masters Champion for 2020. He holds the Melton mile rate record of T1:53.1 (1720m, heat of Great Southern Star, 5 February 2021) and is the second fastest trotter at Bendigo’s Lords Raceway, T1:54.1 (Maori Mile, 5 January 2019).

Bred and owned by Petina, Tornado Valley’s unraced grand dam Bega (1987 Lordship/Chesapeake) produced eight foals for five winners, three of whom also raced and won in Australia. Her winners were :

The jewel in Tornado Valley’s maternal line is his third dam Chesapeake (1978 Game Pride/Susquehanna), 3f Trotter of Year and winner of Trotting Stakes – 3T (now NZ Trotting Derby) among her six victories (three at Addington) and eight placings from twenty one starts for Petina (breeders: Donald Gaugler/Noel Berkett, trainer), T2:06.9, $19,927. Retired after three starts as a five-year-old due to a broken sesamoid bone, Petina says ”we never saw the best of her”. The dam of eleven live foals, five to race for four winners for Petina (except Strawb’s K Two, bred by Brian Wastney) including :