The IRT Harness Jewels once again showcased the industry at its best with both national and track records being set. The atmosphere and setting were outstanding and huge raps go to Dave Branch and the team at Cambridge Raceway for the professional way they presented the day and the superb use of both social and mainstream media to promote the day.

It was a privilege to host Hon Grant Robertson, Deputy Prime Minister and Minister for Racing, at the event and to see his genuine interest in our sport.

Many have asked about the future of the Jewels. No decision will be made by the Board of HRNZ until such time as the current working party looking at the placement of group, feature and series races has finished its work. The change to the birthday of the horse requires a fresh set of eyes to look over our racing events to ensure that they are well placed to give the industry the best return and that such events stimulate the industry. What I can confirm is that should the Jewels be held again, they won’t be held in winter.

The Board has been consulting widely, through Catherine McDonald, our General Manager of Racing, seeking the views of participants on initiatives that might strengthen our racing product. Over the next month the Board will be considering a number of options with the intent of keeping horses racing in New Zealand and at a competitive level.

Over this current season the Board of HRNZ has taken deliberate and responsible steps towards restoring the cash reserve of HRNZ. As part of the ongoing work around club funding for next season, a review is being undertaken to see what beneficial impact the reserve will have on the timing of when race stakes will be paid.

Recently the harness racing Code of Conduct was distributed for industry feedback. Thank you to the people who responded. As a result, the code is to be rewritten in plain English with less emphasis on legal terminology and with reference to the appropriate rules. The new draft will then go back out for consultation.

The Racing Act of 2020 makes mention of racing regions. At a recent meeting of HRNZ, the Board reconfirmed its previous position, that for racing, planning and statistical purposes, the industry will be defined over three geographical regions. The three regions are: the North Island, and in the South Island the areas north of the Waitaki River and the third region being south of the Waitaki River.

I appreciate that clubs are waiting on funding information for next season. Until the TAB can confirm its distribution and Racing New Zealand have agreed on the distribution model, we are not in a position to announce any detail. There has been considerable work going on in the background looking at developing a transparent funding model for clubs. After the Racing New Zealand meeting on 30 June, the Board of HRNZ should be in a better position to inform clubs early in July of indicative funding for the 2021/22 season.

We continue to see some positive trends in the key performance indicators for the season to date. Indicators around favourites have moved as is normal
when we reach group racing time. 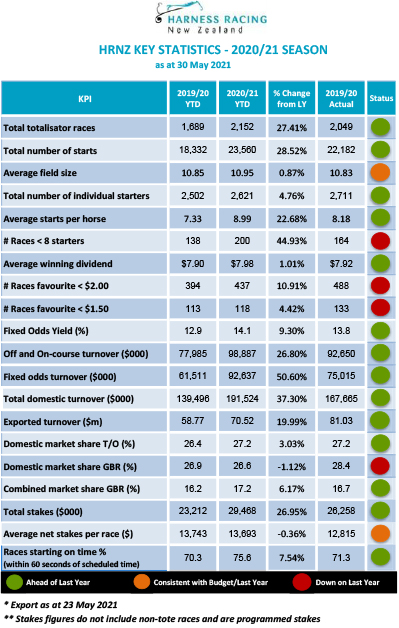