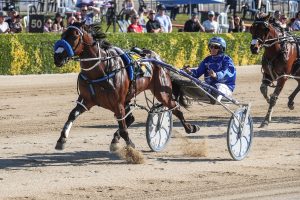 Spankem’s brilliant front-running win in the Mediaworks ‘Make Some Noise’ New Zealand Free-For-All on Show Day at Addington has set up what is set to be a superb final month in the stellar breeding career of his dam, Crushem.

Crushem has entered the final stages of her life as a super-producer for breeders Robin and Gwenda Wah, just days after the twenty-year-old added Group 1 title number six to her resume earlier.

The Holmes Hanover broodmare gem is in the late stages of carrying a full-brother to her superstar son Spankem, due to be foaled any day.

The safe delivery of a healthy Bettor’s Delight foal will end one chapter of the incredible story Crushem has written for the Wahs.

Their journey started with a phone call in 1998 and Robin Wah could not have imagined he was about to plant a seed that twenty years later would produce one of the fastest, if not the fastest, pacer in Australasia.

“Vic and Liz Smith owned Crushem’s dam Elizabeth Denover, they were clients of mine,” Robin Wah said. “And they offered me a couple of turns breeding from her.

“I remember I was out fishing one day at Tekapo and they rang up and said ‘how would you like to do that?’ and I said ‘oh yeah, right oh’ and I was up for it.”

“And that was how I got Crushem.”

Wah admitted at the time, he hoped he could breed a group race winner.

Though the thought of breeding a New Zealand Free-For-All, Miracle Mile, Taylor Mile and Messenger champion was not quite on his radar.

Crushem started off by showing moderate ability on the track, winning a Timaru maiden before going to the broodmare barn.

At that stage, breeding a seventh foal from the mare was hardly in the picture.

But thankfully the Wahs pressed on or Spankem would not have come along.

“We finished racing her and I thought I might as well breed from her” Wah said. “It was only going to be one or two foals.”

“But then I loved the game so much I kept going.”

Crushem started off by producing In The Pocket colt Thumpem, who got his dam’s breeding career off to a brilliant start by winning the Sales Series Final as a two-year-old.

“I had it in my mind it would be great to breed a group race winner. It didn’t have to be a Group 1.”

“Then we had a bit of luck with our first foal, Thumpem, he won a listed race – the Sales Series Final.”

Crushem continued her good start by producing Mach Three filly Sunday Girl, who won once in New Zealand before contesting heats of the New South Wales and Victoria Oaks after she was sold to Australia.

A McArdle colt, Smokem, came next and he also won in Australia.

Sluggem, by Christian Cullen, then showed promise, placing in a Sales Series Final before also contesting good races in Australia.

Crushem’s next Christian Cullen foal, Stompem, did a good job in New Zealand and is still racking up wins in across the Tasman.

But it would be in 2013 when the Wahs turned to siring phenomenon Bettor’s Delight that Crushem would take his dam’s career to a new level.

Fast forward to today, with six Group 1 titles and a Pacing Breeders Of The Year trophy to their name, the thrills from breeding Spankem have not diminished.

And that was again the case on Show Day at Addington.

“It was amazing, he was just super, really.”

“His speed seems to lay hidden there for a while and then they call on it when he needs it.”

“That was the winning of the race, of course. It was a great effort.”

The Wahs have been in the rare position of having the horse they’ve bred and sold leading around the turn and looking a massive winning chance in the last two New Zealand Cups.

Though Spankem was run down late by Cruz Bromac in 2019 and again by Self Assured this year the thrill of running second has still been immense for his breeders.

“The first year we were out there and when he slipped two lengths on them on the corner I though he is going to get this. But it was still a great run and still a great thrill.”

“You can’t ask for more. He has been run down by two horses that have had good runs. You can’t take it away from the winners.”

“I was sitting there and I think I might have bred a Miracle Mile winner and a New Zealand Cup winner in the same year, that would be amazing. But it wasn’t quite to be.”

“We are more than happy with how things have turned out and really proud. And we have met some great people on this journey as well. It has been really fun.”

Crushem, who was officially due to foal on November 18, may almost be finished as a broodmare, but her legacy as a producer is far from being finalised.

The Wahs are breeding from her five-year-old Bettor’s Delight daughter, Ima Single Girl,

The full sister to Spankem has left a Vincent filly and has recently had a foal by Sweet Lou and been served by Art Major.

The Wahs also have an Art Major yearling filly from Crushem. Her two-year-old full-brother was purchased by Cran Dalgety at this year’s national yearling sales.