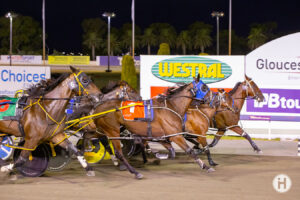 Wildwest (Raging Bull – Bay Jet – Jereme’s Jet), who won the $450,000 Western Australian Pacing Cup, after appearing to be hopelessly out of it at one stage, is a Southland bred gelding who is expected to go on and develop into Grand Circuit material of the highest order.

A member of Gary Hall Snr’s team, Wildwest has been a difficult horse to train owing to his aversion to tight, turning tracks, but has proved himself a young pacer of great ability.

From 28 starts he has notched 13 successes and four placings for $466,290 in stakes and holds a record of 1:52.8. He won at his first eight starts as a three and four-year-old including the Pinjarra 4YO Classic, while at five he took the $50,000 WA Governor’s Cup beating Miracle Moose and Cyclone Banner.

Wildwest is certainly a splendid advertisement for Southland breeding, being a six-year-old gelding by Raging Bull from the Jereme’s Jet mare Bay Jet, who are both now domiciled at Brent and Sheree McIntyre’s Macca Lodge, Gore.

Wildwest was bred by retired Invercargill farmer and cray fisherman Kevin Strong, who also bred his dam. Bay Jet was sold to Macca Lodge in 2020 following the part dispersal of Strong’s stock.

Wildwest’s sire Raging Bull, a $115,000 winning son of Christian Cullen and the American-bred mare San Sophia TT 1:52.6 (a member of the Mamie family), stood his early seasons in Christchurch stud and has since been located at Macca Lodge for the last two years.

Raging Bull has enjoyed a fair measure of success from comparatively low numbers. Other smart performers sired by him have been the NSW Raith Memorial winner Bare Knuckle 1:51.5 ($100,340), the Menangle winner Give Me A Minute (1:52), the exported Princess Holly 1:52.6 ($96,505) and the Albion Park winners Getarattleon, Flame Lady and Mi Furioso Toro.

Bay Jet, the dam of Wildwest, was unraced but she has left three winners from three foals of racing age. Besides Wildwest, Bay Girl is also the dam of a capable racemare in Leer (1:56.1), a winner of four races in NZ and Victoria so far, and Panspacificjet (1:59.9), a winner of two.

Since producing Leer in 2017, Bay Jet has left a two-year-old filly by Net Ten EOM named Durty Nelly, a yearling brother to Wildwest in Wild Bull and a colt foal by Always B Miki and is now safely in foal to Downbytheseaside.

Bay Jet ranks as a half-sister to the thrice Albion Park winner Flight Crew (1:54.2), being out of the unraced Fake Left mare Fake’s Dream (1:59.5), whom Strong bred from in partnership with Neville Cleaver.

Fake’s Dream was out of Clipjoint, by Lumber Dream from Bonnie Win, by Out To Win from the U Scott mare Bonnie Averil, dam of the 1971 NZ Cup winner True Averil.

This family, which traces to the thoroughbred mare Topsy, produced recent Australian classic winners in Bondi Lockdown (Vicbred 3YO Final and Victorian 4YO Bonanza) and My Ultimate Baxter (NSW Simpson Sprint).

Hoofnote: Ten of the 12-horse field in the WA Pacing Cup were bred in New Zealand including the first six placegetters.