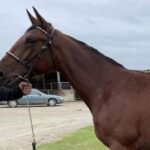 CaptainTreacherous – One Under Kenny colt

Brad Williamson set out to bred a magnificent trotter and he thinks he has – but not everything has gone to plan along the way.

Williamson lines up his first horse for sale at the National Yearling Sales in Christchurch this year in a Captaintreacherous colt from One Under Kenny (Sundon).

The mating of a half-sister to New Zealand’s greatest-ever trotting mare to a pacing sire wasn’t planned.

But Williamson is far from disappointed with the result.

“She was supposed to be a Father Patrick but there was a mishap – through no fault of anyone’s – it was just one of those things that can happen.”

“But since then Tony Herlihy has produced a Captaintreacherous trotter to come out and win the two-year-old trot at the Harness Jewels and there are a few by him that have been going really well in Australia.”

“Overall, things have worked out pretty well and he is a very nice looking horse.”

Williamson hopes his colt can follow in the footsteps of the Herlihy trained and driven Double Delight (Captaintreacherous-Dreamy Delight-Bettor’s Delight), who is unbeaten in the trotting gait.

The only difference is Double Delight is fully pacing bred, being by from a Bettor’s Delight mare.

On looks, the Oamaru trainer, who knows a thing or two about smart trotters, thinks that his colt has the physical attributes to make a smart racehorse.

“He looks like a strong Sundon trotter, if you didn’t know he was by a pacing sire I don’t think you would be able to tell by looking at him.”

“He is a big and athletic type and very strong with it.”

“He is a very nice looking horse and every bit a trotter.”

“We have him trotting behind the jogger getting him ready for the sales and he never breaks stride or puts in a pacing stride.”

Williamson is in the early stages of his foray into breeding.

He hadn’t had much luck with mares getting in foals until his Captaintreacherous yearling came along.

“He is the first yearling I am selling, I have tried to breed the last couple of years but I haven’t had much luck with them getting in foal.”

“It is great to be able to get one out of One Under Kenny.”

“She was a great mare herself and from a great breed, it is pretty exciting to get the chance to breed from her.”

Williamson’s yearling is Lot 194 at the National Yearling Sales in Christchurch.