It’s hard to know where to start when talking about the high quality stallion roster assembled by Andrew Grierson and Paul and Mary Kenny at South Auckland’s famous nursery, Woodlands Stud. 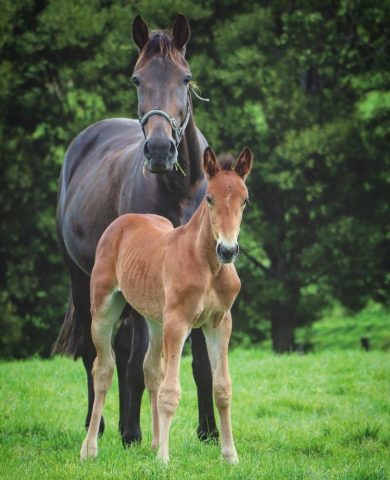 What The Hill Foal at Woodlands Stud

This season they have assembled not only their biggest roster of fresh and chilled semen options but, indisputably, the highest quality one as well.

So large and imposing it is that they’ve now had to spread the load and are standing rookie stud Lather Up alongside longtime consort American Ideal in Victoria at Northern Rivers Equine.

We could sit here and roll through each of their seven stallions meticulously, poring over their various genetic and racetrack upsides, but the fact is that Woodlands Stud’s offerings generally sell themselves.

Grand champion sire Bettor’s Delight is about to be named Stallion of the Year for a 10th straight time and despite his service fee being at a dizzying $25,000, there are no problems fully subscribing him.

He’s advancing in years but is relentless in his achievements. The season is barely a month old and he’s already put his stamp on things with Krug, Self Assured, Bettor Twist and Need You Now.

American Ideal has been a quiet achiever for over a decade here in New Zealand, but his popularity has continued to surge in Australia, hence his relocation last year.

Any doubts local breeders had about his ability to leave a top horse only need to look at rising superstar Copy That, who could easily start favourite in the New Zealand Cup come November.

When I caught up Grierson for this piece, he was getting ready to go hunting in North Otago, a last bit of respite before the relentless grind of stud season ahead.

The horse he was most excited to talk about was actually What The Hill, their third-year trotting sire that has served books of 82 and 94 to date.

Of course, being a son of the single hottest sire in the world right now is an easy selling point.

“We’ve got the only fresh semen son of Muscle Hill, to my knowledge anyway, available Down Under,” says Grierson.

“And besides who is father is, he was a superstar himself on the track, winning more than a million dollars.”

He got plenty of premium mares in his first crop, which are now yearlings and the owner of perhaps New Zealand’s most elite band of trotting broodmares was first in line.

“Ask Ken Breckon what he thinks of What The Hill. He tells me he’s got eight standout yearlings that he believes will be the centerpiece of his draft for next year’s yearling sales.”

There’s no disputing that trotting breeders are spoilt for choice at present, but with only three frozen serves of Muscle Hill available, What The Hill will once again be in hot demand.

That excites Grierson. And you need to understand that after a full decade of non-stop and constant high-level success, it takes a fair bit to get him excited.

The American yearling sales are just around the corner and one of the most talked about rookie sires in the catalogues is Downbytheseaside, who has just returned for his third season at Woodlands.

“He started in the northern hemisphere six months before here, so we are really excited to see how his yearlings are received in the sale ring.

“We’ve spoken to many people up there who are well positioned to make judgement calls – and they don’t wear rose-tinted glasses – who have told us that he has stamped his foals with his own outstanding looks.

“He was a super race horse and we’re quietly confident that he’s going to make that transition in to super sire.

“It’s common for a sire’s numbers to drop away after their debut season because breeders want to wait and see what that first crop does in the ring and on the track.

“But his numbers haven’t dropped away at all from season to season and all we are hearing is good reports about his first crop.”

With an overabundance of Bettor’s Delight mares now in the breeding barn, it made sense for Woodlands to invest in sires deemed a good outcross to them.

Sweet Lou is the most famous example, but Downbytheseaside was reinforcement of that business plan, and for a specific reason.

“We’ve obviously got a lot of Bettor’s Delight mares. Not just us, breeders all over the country.

“And what we noticed at the Harrisburg broodmare sales was Hanover Shoe Farms was picking up all these nice Bettor’s Delight mares.

“The theory they subscribed to is that they are going to be a super cross for Somebeachsomewhere and his sons.

“So that was the main driver for us in getting a son of Somebeachsomewhere in Downbytheseaside.

“And of course, that is also why we got Sweet Lou (Yankee Cruiser), because he crossed so well with Bettor’s Delight mares.”

Sweet Lou is chugging along as a consistent performer in the New Zealand sire ranks, his oldest crop now four-year-olds and numbering just 60.

With slim starting numbers, he was never going to take the world by storm straight off the bat, but he got the best possible advertisement when he produced brilliant filly, and 2YO of the Year, Sweet On Me, amongst his first few starters early last year.

Spirit Of St Louis and the uber-exciting Fabrizio are now his torch-bearers in a crop that has produced 33 winners from those 60 foals.

There’s a whole lot more of ‘the big white blaze’ to come as he leveraged off the early success of that first crop in to subsequent yields of 229 and 213 mares in the last two seasons.

“When you look at the statistics, he’s done unbelievably well. His percentages are extremely high. It’s perhaps a little deceptive because it can be a numbers game, but we will start to see that is those big crops filter through.”

And it would remiss not to touch on the other rookie gracing the barn in Clevedon – New Zealand’s own champion trotter, Speeding Spur

It’s been a natural progression for him to join the Woodlands roster this season, replacing his dad Pegasus Spur, after a successful American sojourn that netted a Group 1 victory and a track record.

“He’s won nine Group 1 races and is the only New Zealand trotting entire ever to win a million dollars,”

“So, he deserves some really good mares and we’ll do our best to help him out with that.

“We’ve built our trotting mare band up to about 25 now and he’ll get a fair few of them.”

Grierson noted that breeders can go to Speeding Spur and be almost certain to get their mare in foal.

“He’s only just started in the breeding shed; we’ve collected a few times and it’s come to him really easily.

“And I’ll tell you what – he’s got the best quality semen out of any trotting stallion I’ve ever seen.

“So if breeders are sick and tired of going frozen and not getting in foal, he’s a great option for them.”

Woodlands, along with the other big studs Down Under, have been confronted with two major hurdles ahead of this breeding season, both unforeseen.

One is the ability for semen to be transported across the Tasman Sea in a timely fashion and the other is the imposition of stallion book restrictions by Harness Racing Australia.

Grierson didn’t want to go down that road again, decrying the book limitations in Aussie, but summed it up succinctly by calling it “a disgrace” the way it was introduced with no notice.

He made his feelings clear in a recent opinion piece published online and the stud along with a couple of others, are mounting a legal challenge to HRA’s move.

“The person it’s going to impact this year is the smaller breeder, the very same people that think this is great.

“We don’t want to go to a court case, but HRA seem hell-bent on it, so we are standing up for our interests.”

The issue of semen transport was any equally pressing issue.

For many years, Australian couple Geoff and Lorraine Barnes have transported chilled semen back and forth across the Tasman, racking up hundreds and hundreds of flights.

The big studs all banded together to pay for the service, which was seen as imperative in getting mares in the other country served on the same day as a collection.

But the Covid-19 pandemic has put a halt to that, 14-day quarantines in both countries meaning the Barnes’ are unable to operate.

“There was no clearance coming for them in the foreseeable future,” said Grierson.

“So, what we’ve done, is contracted a company that move blood and human body parts between Australia and New Zealand.

“They are set up and cleared to get a quick turnaround through customs because they’re a huge company with an important function.”

Alabar, Nevele R and Northern Rivers Equine have banded together to ensure their various fresh-semen stallions can serve in both countries.

It’s especially important for Woodlands in the case of Later Up and American Ideal, who are both being forced to ‘max out’ at 150 serves in Australia.

Woodlands, along with Paul and Mary Kenny, will put as many as 170 mares in foal this season, which is become of vital importance to New Zealand’s ongoing foal crops as numbers have eroded over the past two decades.

Pacing crops especially are really starting to feel the finch, but Grierson takes pride in the fact that, through the weanling sale especially, any regular joe in the racing industry can afford to buy a young horse by a top sire from a quality maternal family without breaking the bank.

“We all thoroughly enjoy breeding and will continue to do that as a way of supporting the industry that supports us.”