He came in like a wrecking ball, but now he’s much more of a complete package. 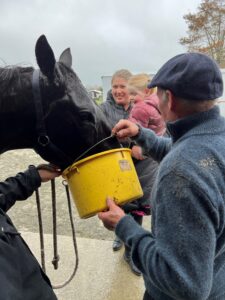 Blair Orange filled in driving the five-year-old, landing a perfect run in the one-one before he won a late homestraight duel with Hurricane Hendrix (Rocknroll Heaven-Star Of Isis-American Ideal).

Mainland picked up It’s A Delight after she was unable to make the track through injury.

Wrecking Ball is her second foal and according to Milne he was well named.

The pacer caught the eye of plenty of good judges in his workouts before he hit the track.

It was clear the horse had ability, but it was just as clear he was wayward.

Looking back there is one workout in particular that stands out for Mainland.

“One day at the workouts he fell over in a puddle and when he got up he was grey with mud on one side,” the breeder-owner said.

“All of the guys in the grandstand were laughing at him.”

“But they weren’t laughing when he came down the outside and won it.”

Milne has worked hard to iron out the pacer’s wayward tendencies and going by his win on Saturday he is clearly winning the battle.

“He is well named,” Milne quipped.

“He just wanted to race the other horses all the time, but he has come a long way, he is much more relaxed now.”
Wrecking Ball still has the odd wayward trick in him.

The pacer ran in on the home bend in his previous outing, leading to the suspension which saw Milne on the sidelines and Orange in the sulky at Winton.

Mainland and his family who were on hand to cheer Wrecking Ball home look to have more to shout about coming up.

Firstly, through Wrecking Ball who Milne plans to aim at the recently announced RATTO race series which culminates at his home track at Wyndham.

Secondly through the stock from It’s A Delight they have to come through.

Mainland has two Sportswriters, a four-year-old in Writers Delight who is on her way back to the track after having one start.

Milne has a two-year-old colt Heza Good Sport who is currently going through his second preparation.

It’s A Delight was served by Sky Major in the spring.