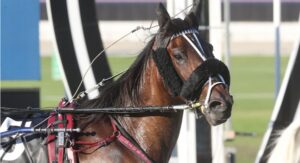 Ben and Karen Calder’s foundation family keeps on producing and judging by recent wins from Old Town Road and Meohmymartini there is plenty more to come.

Old Town Road (Bettor’s Delight-Lucy’s Way-In The Pocket) has looked like a three-year-old with a big future, winning the last two of just his three career starts at Alexandra Park for trainer John Dickie.

Meohmymartini (American Ideal-Treble Cone-Grimfromeartoear), from a half-sister to Old Town Road, was an impressive winner for the Calders and a group of their friends at Winton this month when debuting from Brett Gray’s barn.

Both progressive types are descendants of Tanisa, the dam of the Calder’s first good horse in Grinaldi.

“We bought Grinaldi at the yearling sales and we raced him with Karen’s parents,” Ben Calder said. “A couple of years later I bought his mother and we ended up breeding Bremner Bay. It has been a great family and it is great to see it still kicking a few more goals.”

Old Town Road and Meohmymartini have more in common than their pedigree pages. Both are now able to show their potential after overcoming hoof issues.

“Old Town Road looks the real deal at this stage, but with horses, anything can go wrong,” Calder said. “And it did go wrong because he had a bad row to hoe as far as stone bruises went. He just got one after another. It really put us on the back foot right through his preparations.”

Meohmymartini’s early progress was made more difficult by her recovery from a pastern injury. With that behind her, an abscess also threatened to delay her from finally making it to the races last month.

“She was going nice, but she was just lugging a bit and she had her head a bit high.”

“But there was an underlying problem. She has had a niggle going on and she wasn’t pacing as good as she can because she was feeling her feet. She has improved out of sight since then.”

The Calders have scaled back their breeding operation at Grinaldi Lodge in recent seasons.

They have just one more filly from the family that has produced good winners including Mr Mojito, Foo Fighter, The Oyster Man and Mr Kiwi, an American Ideal yearling, the final foal from Lucy’s Way.

The Calder’s trotting breed has produced plenty of quality squaregaiters over the years through Sunning, a former age-group performer and a half-sister to champion sire Sundon. Like their pacing breed, Sunning’s line is still producing plenty of nice types.

Murano (Majestic Son-Medora-Muscles Yankee), from a daughter of Sunning won at Ashburton last month. The Calders also have Sunning’s last foal, Harbour Queen, racing at the moment. Both trotters are with Sunning’s trainer, Kevin Townley.