Skip to content
Double Up is on the up

Double Up is on the up 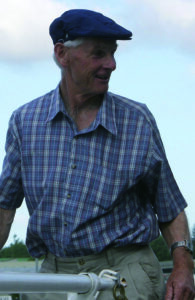 One of the most capable young pacers racing in Western Australia at present is the New Zealand bred five-year-old Double Up (American Ideal – Vegas Delight – Bettor’s Delight) who has proved himself in the top flight and has won his way back to WA Cup class with two recent Gloucester Park successes.

His latest winning run over 2130 metres from a wide barrier in a $30,000 Free-for-all was a terrific performance. He was snookered five deep on the marker pegs, but finally prevailed in a three-way photo at a 1:55.6 rate.

The American Ideal gelding was bred by well known Kumeu couple Les and Marion Pettifer, who have bred successfully from his family since the mid 1980’s.

“I bought a Lordship mare called Jetsetter off Nelson horseman Tom Fox. She had a tremendous turn of foot,” Les said.

At the stud Jetsetter left five foals for five winners including Singapore Girl, a winner in 1:58 in America, the Perth winners Flight To Fame and Fight To Glory and the Vance Hanover mare Flight Queen.

“Pocket Queen was probably the best one from this family,” Les stated. “She won two Group 2 races in NZ and was placed in a heat of the Breeders Crown in Victoria.”

Vegas Delight’s first issue was Troubador (by Shadow Play), who won three in NZ and a further five at the Victorian provincials where he took a record of 1:57.1.

Next, to the cover of American Ideal, she produced Double Up, followed by Ilovelucy, a Sweet Lou filly who won as a two-year-old at Cambridge Raceway before being sold to South Australian interests.

A yearling brother to Double Up is now on his second preparation with Pukekohe horseman Brent Mangos and is showing good potential, while her Always B Miki colt was weaned recently and she is now safely in foal to Downbytheseaside.

Double Up’s distaff side shows an unbroken chain of champion sires and broodmare sires in American Ideal, Bettor’s Delight, In The Pocket, Vance Hanover and Lordship. He is bred on the identical cross as the Queensland Derby winner American Dealer, the star WA pacer Magnificent Storm, Mister Daytona ($437,934), Vettel (1:48.6) and Ideal Agent, who took out the WA Easter Cup on the same night as Double Up won.