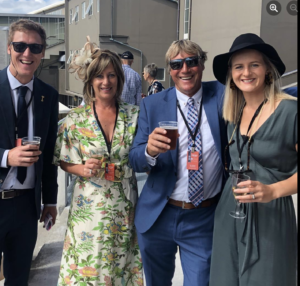 Masterton breeder Wayne Stewart didn’t have high hopes at the beginning of his involvement in breeding and racing, but the outlook sure has changed.

Stewart and his wife Connie enjoyed winning yet another race with a descendant of their foundation mare Seance (Fernside Bachelor) when her great-great granddaughter Bettorlini (Bettor’s Delight-Cullini-Christian Cullen) scored at Motukarara on Sunday.

With two winners on the ground and two more Bettor’s Delight full siblings on the ground, both born on the golden Christian Cullen cross, the Stewarts look perfectly placed to enjoy more success.

But whatever the results going forward, the couple are a long way from where they started.

With a mare described as the one that got away.

“My grandmother bought me a broodmare when I was about 16,” Wayne Stewart said.

“I ran into Johnny Rodgers one day, I was proud as punch that I had this breed and I said it is any relation to your breed.”

“He said it was the old man’s breed and it was no good and he got rid of them all, but one managed to escape.”

“So, I didn’t have a lot of confidence but it has been about 50-something years to prove him wrong.”

“We have a laugh about it now and again.”

Stewart credits his wife’s involvement for having a big impact on the couple’s success.

Connie is a talented horsewoman herself having been heavily involved in eventing.

Since taking on the Seance breed, the Stewarts’ philosophy has been to go to the best stallions to give themselves every chance.

And it certainly seems to be paying off.

“It doesn’t mean that you are going to get the best but it does help eliminate getting a slow one.”

Bettorlini is another of her breed to produce success for the Stewarts from the Greg and Nina Hope stable.

“We have been with Greg and Nina for many years.”

“At the moment Connie and I are busy enough, I am farming and a stock agent and she is a real estate agent and we are working pretty hard out.”

“Once we get a bit closer to the retirement age we might potter round with a few ourselves but at the moment it is easier to pay the experts to do the job.”

The Stewarts have effectively sealed the fifth generation of their breed becoming a reality.

Bettorlini won’t be sold and will head straight to the broodmare paddock once she is finished racing.

Judging by her win on Sunday it won’t be for a while yet.