Peakz Luck (Peak – Howz Lucky), who was bred by Brian and Rosemary Tims, of the ‘Luck’ breed fame, is proving one of the ‘finds’ of the Victorian trotting scene. 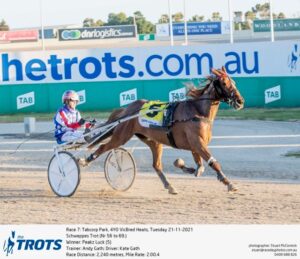 The chestnut mare has won five of her last six starts highlighted by the Group 3 $25,000 Central Victorian Trotting Championship from a 30 metre handicap at Maryborough recently.

A six-year-old, Peakz Luck is in her second full season of racing, but from 34 starts she has won eight and been 10 times placed for $72,649 in stakes.

Peakz Luck is by the Danish bred horse Peak, a winner at Group 1 level in both Europe and NZ, who was first at the stud at Alabar’s Auckland farm and is now standing at Ballarat in Victoria.

Peak has had a fair measure of success with his first crops in NZ. His stock includes Invictus, Doff Your Cap, Gimondi, Aorangi, Allaboutthemoment and Queen Of Strathfield.

Howz Lucky was out of Great Memories, by Great Heights (son of Great Evander) from Mighty Mir, by the double gaited Gerry Mir from Miss Bev, by Great Evander from the Light Brigade mare Beverley Light.

The family, which traces to the Sungod mare Evening Sun, produced a champion trotter in Easton Light, who won 36 races including the Dominion Handicap twice, the NZ Trotting Free-for-all twice, the National Trot and the Rowe Cup, and other good trotters in Miss Debra (Rowe Cup), Prime Power (NZ Harness Jewels 3YO), Flip Flop and Misscshells.