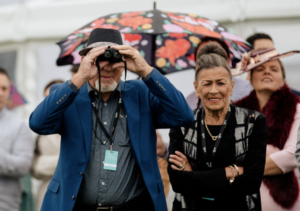 Harness is like rugby league – its for the working class people

The younger half-brother of the best horse that Bruce and Sharron Tarry have bred won the first race at Cambridge Raceway last Thursday night.

The Steve and Amanda Telfer trained, and Benjamin Butcher driven, Cya Doit (Art Major – Cyathea – Fake Left) notched up his second victory in 11 starts in the Box Seat Up to R48 Pace.

“Even though we don’t own him any more we never miss any of our progeny go around. It was a real thrill to see him win for his owners – Stonewall Stud and the Cya Doit Syndicate.

“He looks like he will develop into a nice horse, but he will have to be good to be better than his older half-brother Cyamach. He is the best horse that Sharron and I have bred,” Tarry said.

“He recorded a 1:54.3 mile rate in Australia, and then went 1:50.8 in the United States. He won an Interdominion Consolation Final in Perth in December 2016. That was his last Australian victory. He also won 10 races here,” the Mangawhai Heads resident said.

“Cyathea was Frond’s second foal, and she could have been anything as a racehorse. At least a seven-win pacer I would have thought, but sadly her career was cut short with injury.

“She broke down and got a stone bruise as a 2-year-old. We got her injected in the hock and she came back lame. We were devastated.

“She only raced seven times for two wins and three placings between September and December 2005. Todd Mitchell trained and drove her for us,” Tarry said.

“Cya Doit was the last foal we bred out of the mare, and then we sold her to Alabar Stud. Robert (Mitchell) was not getting any younger, and because he was in his 70s, he thought it was the time to wind his operation down and offload his mares.

“Robert and I have been mates for many decades. We are the same age. He used to train my horses before Todd was on the scene. We were gutted but we understood where he was coming from,” said Tarry.

“When we bred our horses, it was Robert who agisted them for us, and for that we gave him and Sandy shares in the breeding.

Those two are a Vincent yearling filly, and an Always Be Miki weanling colt. Cyathea is also in foal to Lazarus.

The only other winner out of Cyathea so far has been the 2017 Art Major colt, Cya Art. The Tarrys and the Mitchells received $28,000 for him at the 2019 Yearling Sale in Karaka.

A builder by trade, Tarry spent 38 years in the auto wrecking business in Auckland. He is also a former galloping owner, quality league player and huge Warriors fan.

“I liken rugby league to the harness racing people. They are sports for the working-class people, unlike rugby union and galloping,” he said.

Cyathea is the only horse the Tarrys are breeding from. The best horse they have owned was the now 13-year-old son of McArdle – Mainland Banner, Stunin Banner, who won 16 races and placed 29 times between 2012 and 2017.

He said Todd Mitchell did the driving behind Stunin Banner.

“I think Todd had one of his first drives behind one of my horses back in the early 1980s and then when his Dad retired from training, I sent my horses to him.

“We go back several decades with the Mitchells and they have always been very professional horsemen and treated our horses very well,” Tarry said.

“I love the game and will never forget winning my first Group One with Linda Lovegrace,” he added.