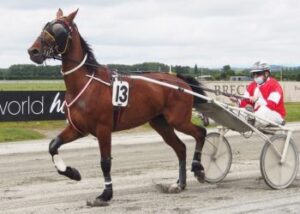 One Two Menny set Central Southland Raceway alight with a performance that brought back memories of one of the stars from a great New Zealand trotting breed for Timaru owner-breeder George Emond.

One Two Menny (Majestic Son-One Two Kenny-Great Success) led the feature trot field on Wairio Cup Day by as far as 15-lengths in the middle stages before finding plenty in the home straight to complete and epic and head-turning victory.

The trotter is raced by the K Club Syndicate, set up by Emond, who bred his grand dam One Under Kenny (Sundon-Frances Jay Bee-Pointer Hanover) with the late Peter Bradley and Bruce Wallace.

Though One Under Kenny didn’t lead by as far in the Bill Cummings Memorial Handicap Trot at Forbury Park in 2003, she produced a similar performance to dig deep after setting a strong tempo and held off the finish of Castleton’s Mission to win.

The mare’s winning time of 4.09.5 for 3200m set a mares record that would stand until the closure of Forbury Park.

The time was also faster than 4.06.9 mark for pacing mares over the same trip, set by Black Eyed Bailey.

There looks like many more thrills to come for Emond and his friends in the K Club Syndicate – made up of keen golfers – judging by their trotter’s incredible win at Winton.

Emond, who has been an integral part of the Kenny breed which he estimates has produced 300 winners, credits trainer Robert Wilson for helping turn One Two Menny’s form around.

“We know one of the owners of Willangus Lad who told us about Robert.”

“It is a reasonably new association.”

“Ken Barron said to me that the horse has all sorts of ability but he was very head-strong and he might be better off in a smaller stable.”

“Ken was a real gentleman about it.”

“Robert has done a wonderful job, he is a magnificent trainer, he puts a lot of time into his horses.”

“We are absolutely thrilled.”

Emond watched on as his trotter downed a field that contained classy horses like Andy Hall and enjoyed quite the celebration afterwards thanks to the hospitality of the Wairio club.

More celebrations look to be on offer, not just because of the form of One Two Menny.

Wilson also has his three-year-old half-sister in Two Menny Muscles (Muscle Mass-One Two Kenny-Great Success) and she is shaping up well ahead of going to the trials.

The filly won once and placed twice in five starts before moving south.

The K Club Syndicate have one more foal from One Two Kenny, which is her last.

The broodmare died while foaling a What The Hill colt that is about to turn two.

The colt was fostered onto a mare that lost a Bettor’s Delight foal at Nevele R Stud.

His owners have high hopes for the trotter, with Emond reporting that he is rated the best of the three of One Two Kenny’s progeny to have been educated by the Barron stable.

Emond shared in the breeding of One Two Kenny’s dam, One Under Kenny who is now 23-years-old, with Phil Williamson and the family of the late Peter Bradley.

Phil Williamson bred a Majestic Son colt from her this year, which Emond suspects will be her last foal.