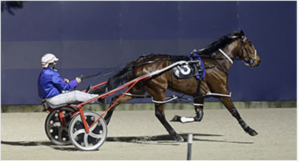 Lady of the Light

YOUNG LADY OF THE MOMENT

Lady Of The Light commenced her winning sequence in mid-September with the first of five victories at northern headquarters Alexandra Park. Driven by Nicky Chilcott in her only experience at a distance greater than 1700m, it is the only time where her mile rate has not been sub two minutes (2200m, 2:01.9). Four victories at 1700m for regular driver Maurice McKendry include a best mile rating of 1:55.8 and the second heat of the Dunstan Horsefeeds NZSS two year old fillies’ series. Qualified for the Group One final on New Year’s Eve at Alexandra Park, she will her line up against southern raiders including 2f NZSS (April 2021) and Caduceus Club Classic winner True Fantasy and Remember Me.

With high credentials the daughter of Bettors Delight from Falcon Seelster mare Steel The Light was bred by Woodlands Stud. A member of the Australian family of Verity A1, Lady Of the Light’s female tail line reveals an unusual situation where there are only eight removes from foundation mare Verity to Lady Of the Light over one hundred and twenty years. The gaps between foals range from nine years through to twenty one (Light Pearl to Light Lobell), twenty two (Pearlchild to Vanity Fair) and twenty three years (Light Lobell to Star Empress).

At present Lady Of The Light’s form shines brightly leading into major juvenile races ahead. She may well prove in time to be the cream of Steel the Light’s crop.