Skip to content
Mo Szyslak serves it up to Ron Gibbons

Mo Szyslak serves it up to Ron Gibbons

Mangere Bridge mason, Ron Gibbons, has the 1976 Flying Lord mare, Royal Parade, to indirectly thank for some of his best memories in harness racing. 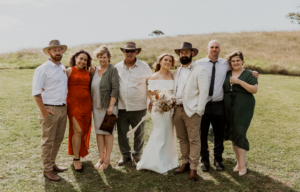 Gibbons owns and bred Mo Szyslak. The Steven Reid/Simon McMullan trained and Peter Ferguson driven 3-year-old colt has now won two of his nine starts and placed in three others since embarking on his career at Alexandra Park on October 8 last year.

“It all started with the All Over Red Rover Syndicate’. Dale Kells and I joined it in the mid-1990s, when one owner pulled out. We had three horses. Two were out of Royal Parade and the other was the 1993 New York Motoring – Cyclone Bola seven-win mare, Anakim.

“But it was Tyler Foulden and On Parade that gave me early success. ‘Tyler’ was the fifth foal out of Royal Parade and On Parade was foal number seven,” Gibbons said.

The 1992 Sharvid Adios mare, On Parade, who was also trained by David and the late John Butcher, only won three races, but she left Gibbons and Dale Kells two foals – one of which was the 2004 Christian Cullen four-win mare, Mo Cullen.

“Mo Cullen left us three foals and then the first foal I bred on my own from her was Mo Szyslak. Dale and I bred those first three foals from Mo Cullen, with foal number one, Mo Casino, being the best of them with three wins. He won nine more in Australia ($106,860).

“The only other foal I have bred from Mo Cullen was a two-year-old Gold Ace colt named Mo Money, who is not far off qualifying. Steven and Simon like the way he is progressing.

All my horses have been trained by Steven. We go way back to the night I met Steven at the Christchurch Casino when he was down for the New Zealand Cup. I’d never met him before, but cheekily asked him to get me a horse one day.

“Not long after ‘Reidman’ rang me saying he had a horse ready to race. His name was Chip Again. He was a 1990 Transport Chip gelding, who won three races for us. So, my connection with Steven goes back three decades,” Gibbons said.

Gibbons said he got into breeding through the ‘All Over Red Rover Syndicate’, which bred the first three foals out of On Parade, before it disbanded.

Gibbons and Kells then bred Flaunting The Faith (2002 five-win Christian Cullen gelding) before breeding their last foal out of the mare – Mo Cullen. 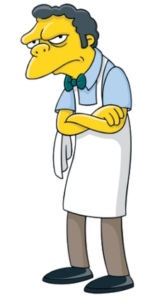 Moe – from The Simpsons

” “I think Mo Szyslak could be the best foal out of Mo Cullen. Steven likes him a lot and because he’s only three he thinks he will make a real good four and five-year-old.

“If he does keep improving he could be an outside chance to run in a derby later in the year, but that’s being hopeful. His older brother (Mo Casino) raced in the Jewels the year Heaven Rocks won, so I’m hoping the breed will kick on,” Gibbons said.

“It was a nice drive by Peter on Friday. It was just a shame Steven didn’t get to see the race because he was taken to hospital after a race fall behind Take The Miki in race two.

Gibbons is a mason by trade and said he loved harness racing, but it was merely a hobby to him.

“It’s hard to make money out of the game, but I do it because it’s a passion. Steven and Simon are good trainers and I’m very happy to have my horses there.”

For the record: Gibbons named Mo Szyslak after “Moe” Szyslak – a recurring character from the animated television series The Simpsons. He is voiced by Hank Azaria and first appeared in the series premiere episode in 1989. Moe is the proprietor and bartender of Moe’s Tavern, a Springfield bar frequented by Homer Simpson. He is grouchy, lonely, miserable and prone to violent outbursts, and is constantly down on his luck – unlike his namesakes