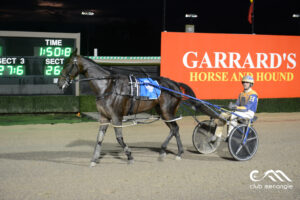 Stingray Tara, a six-year-old brother to the former champion pacer Tiger Tara, is proving one of the ‘finds’ of the season in NSW.

The Bettor’s Delight gelding’s success in the Group 3 $30,600 Autumn Gift Final at Menangle last Saturday was his second winning run in as many starts since heading north.

After racing midfield on the marker pegs, Stingray Tara peeled to the outside and let down with a spectacular finishing flourish to score by a length from the pacesetting Fire Fox.

Stingray Tara was bred by Gore enthusiasts Tim Grant and Grant Anicich, who sold him for $52,000 at the National Yearling Sale in Christchurch in 2017.

He is out of the unraced Dream Away mare Tara Gold, who left six winners with her first six foals. Besides Tiger Tara and Stingray Tara, she is the dam of Turbo Tara (who won three), Rock Of Tara (three), Tara Tutaia (two) and Yankee Tara.

“We’ll breed from her when she finishes racing. She’s the last one of the line,” Anicich said.

“We sold Tara Gold to NSW three years ago but she died while foaling to He’s Watching.”

The partners are now breeding from Tara Gold’s only other filly, Tara Tutaia (by Somebeachsomewhere).

“She’s produced a two-year-old filly by Vincent who’s had three starts so far, a colt foal by Bettor’s Delight and is in foal to Always B Miki,” Anicich said. “We plan to sell the colt at next year’s sales.”

Anicich’s late father Ray Anicich established the line from which Stingray Tara belongs when he bought the Whipster mare Petronella from a mixed sale in the 1970’s.

“She failed to get into foal for the first three years, but then she produced a smart pacer in Vita Man,” Grant said.

Other topliners tracing back to Petronella have been the Fremantle Cup winner Power Of Tara, the NZ Easter Cup winners A G’s White Socks and Matthew Lee, the Breeders Crown champion Tango Tara, Sammy Maguire, Delightful Tara and Class Of Tara.